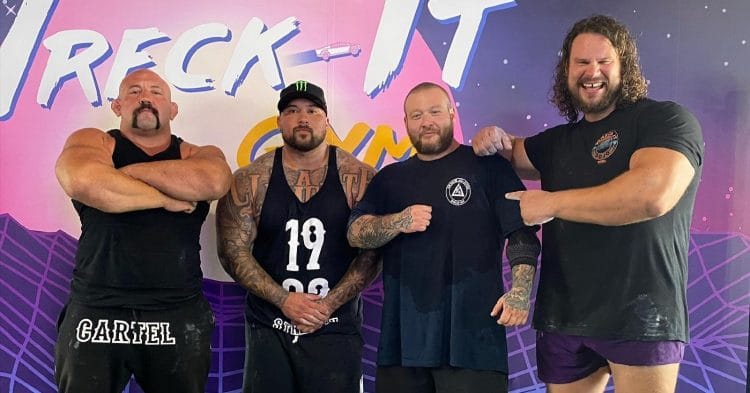 Over the last few years, Action Bronson has come a long way in terms of his fitness journey. He recently put those skills to the test, by hanging out for a training session with 2019 World Strongest Man Martins Licis.

Throughout the course of his weight loss journey, Bronson has crossed paths with several icons in the fitness world. Between appearing on Joe Rogan’s podcast, to working with MMA fighters and more, he has been very open about his miraculous transformation.

Recently the New York based rapper found himself training alongside Licis at the strongman’s own Wreck-It Gym, with the two working together for the second time. With this trip however, the focus was on deadlift form, and they were joined by powerlifter Big Boy, and undefeated MMA fighter Orlando Sanchez.

“Today’s going to be a pulling day. We’re going to be focusing mostly on control. So for example, on deadlifts, we’re going to be doing 5 seconds slow eccentric lowering, then exploding on the way up,” Licis said.

Before they get started, Big Boy said that he had dropped a ton of weight recently, due to a focus on striking and jiu-jitsu, and was curious to see how much he could still deadlift. As for Action Bronson, he could not help but rave about the increase in range of motion that he is experienced since working on his squat form with the WSM winner the last time.

Warming up with Farmer’s Carries and agility ladders, Licis is helping the men learn proper technique. This only continued with the deadlifts, as he and Big Boy told the less experienced rapper about the proper form to have for safe deadlifting, while focusing on the eccentric movements.

Then they got to work on deadlifts, seeing how heavy they could go while focusing on keeping the weight steady while lowering it. To start, Bronson, Sanchez, Big Boy, and Licis all took turns doing three reps of a 385lb deadlift, making sure to focus on lowering the weight smoothly with each rep.

Next, Martins increased the weight to 500lb, which he was able to pull at least twice, while Big Boy managed a sturdy five reps. As for Action, he was unable to lift this weight, but there is no shame in that by any means.

This workout session ended with some pull-ups, before Martins Licis and Big Boy had a face-off, doing 150lb single arm dumbbell rows, while Action Bronson and Orlando Sanchez cheered them on. In the end, Big Boy got the better of this challenge, doing 31 reps to Martins’s 30.

This was a fun workout between some well liked guys in the fitness world. Not to mention the fact that it had to be extremely beneficial for Action.