Are you suffering from cardio machine confusion? Can’t choose between using an air bike or a rowing machine? Let us help you decide! 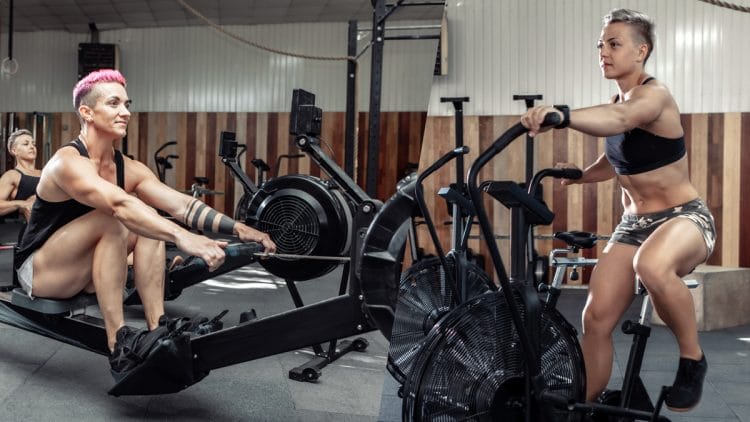 Whether you are buying equipment for your home gym or work out in a well-equipped commercial fitness center, you may find yourself in the unenviable position of having to choose between an air bike or a rower.

The problem is that both of these exercise machines provide a full-body, low-impact workout and are very effective for building fitness and burning fat.

Choosing between them is a real challenge!

To help you make your decision, in this guide, we’re going to put both of these machines to the test and reveal which one is best.

What is an Air Bike? 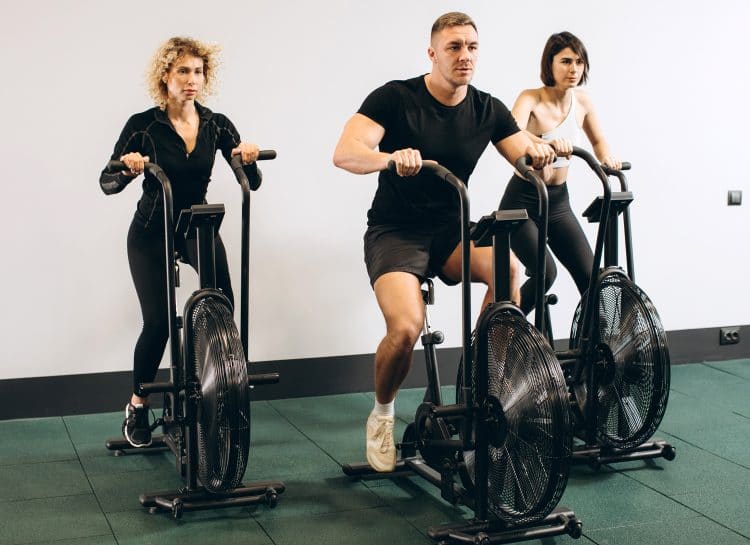 Air bikes, such as the Schwinn Airdyne and Assault Bike, have been around for several decades but have become increasingly popular because of CrossFit. A lot of CrossFit workouts, called WODs, involve air bike sprints. CrossFitters call air bikes “the devil’s tricycle” because it’s such a brutal workout machine!

In simple terms, an air bike is an exercise cycle with a large fan instead of a flywheel. The harder you pedal, the more resistance you have to overcome, which means air bikes are suitable for all levels of exerciser, from beginner to ultra-advanced.

But, the main difference between a regular exercise bike and an air bike is that air bikes have moving arms, so you can push and pull as well as pedal. This creates a full-body workout rather than just working your legs.

What is a Rowing Machine? 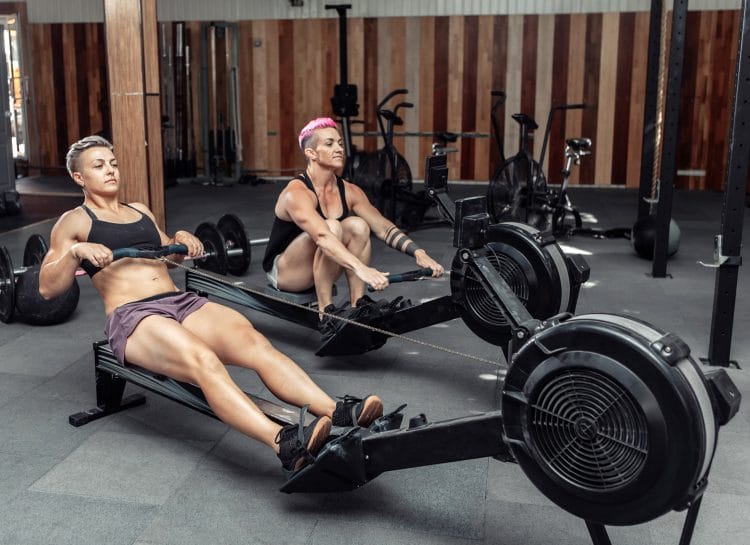 As their name suggests, rowing machines simulate rowing on water. Like air bikes, rowers have been around for many years. They have also enjoyed a resurgence in popularity because of CrossFit. Indoor rowing is also a bonafide sport, with 2k and 5k being two of the most popular racing distances.

The best rowing machines have a fan for resistance, so, like air bikes, the harder you pull, the more intense your workout becomes. Most also have variable air dampers so that you can adjust the airflow. Like gears on a bike, the damper can be adjusted so you can row light and fast or heavy and slow as preferred. Rowing is a full-body workout.

Although they look very different, air bikes and rowers share several similarities. Both are low impact, use air for resistance, and are full-body workouts. So, it’s no wonder that some people can’t choose between them!

To make it easier to choose, let’s judge these popular cardio machines by a few different criteria:

Air bikes and rowers both offer a full-body workout. After all, both machines use your arms and legs simultaneously. However, where air bikes involve an upper-body push AND pull, rowing is just a pulling exercise. As such, your chest and triceps will get a better workout on an air bike.

So, while you can use an air bike or rower to work all your major muscles, air bikes are MORE of a full-body workout. That said, this is easily remedied by doing a few sets of push-ups once you’ve finished rowing.

Winner: Air bike (but only just!)

Rowing is a surprisingly technical, coordinated activity. Each stroke starts with a leg push, and then, as the handle passes your knees, you begin to pull with your arms. You also need to remember to sit up straight and avoid rounding your lower back.

While rowing is not difficult, it does require a little practice and attention to what you are doing. Poor form could increase your risk of injury.

In contrast, using an air bike is much simpler; just sit on the saddle, place your feet on the pedals, grab the handles, and get to work. Your movements are guided, and it’s almost impossible to use an air bike incorrectly. 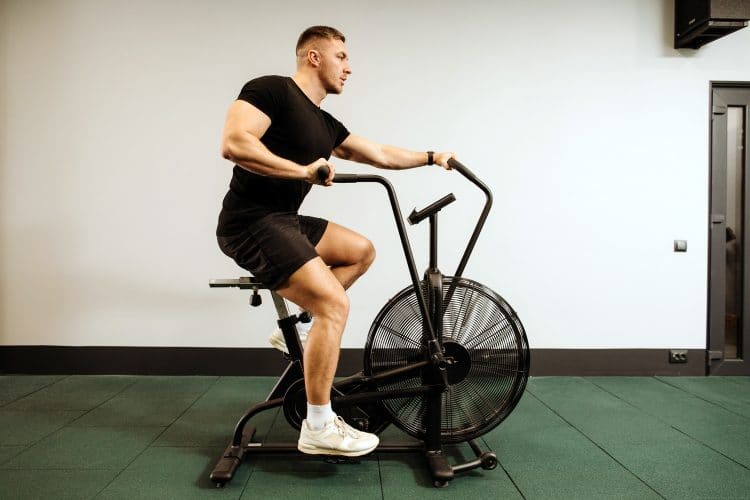 Rowing is a phasic activity. You push with your legs and pull with your arms, and then return to your starting position against no real resistance. So, for every stroke you row, your muscles are only really working for half of each rep.

In contrast, air bikes provide constant activity, which means your muscles are working all the time.

Because of this, air bikes are potentially better for burning calories. But, of course, total calorie expenditure depends on things like speed, duration, and intensity.

That said, minute by minute, you SHOULD be able to burn more calories on an air bike than a rowing machine, as shown in the chart below (1):

There is only one way to use a rower – by rowing! You push with your legs and pull with your arms, and that’s pretty much it.

But, with an air bike, you can:

As such, air bikes are more versatile than rowers. However, that may not be an issue if you are happy to repeat the same movement for the entire duration of your workouts.

You can use an air bike or a rower for interval training, but the air bike is arguably better. Air bikes are very forgiving in terms of technique, and there is not a lot you can do wrong, even if you are exhausted.

In contrast, rowing while tired can cause technical breakdown, which could lead to injury.

So, if you mainly want a cardio machine for interval training and plan on pushing yourself to the limit, the air bike is arguably your best choice. 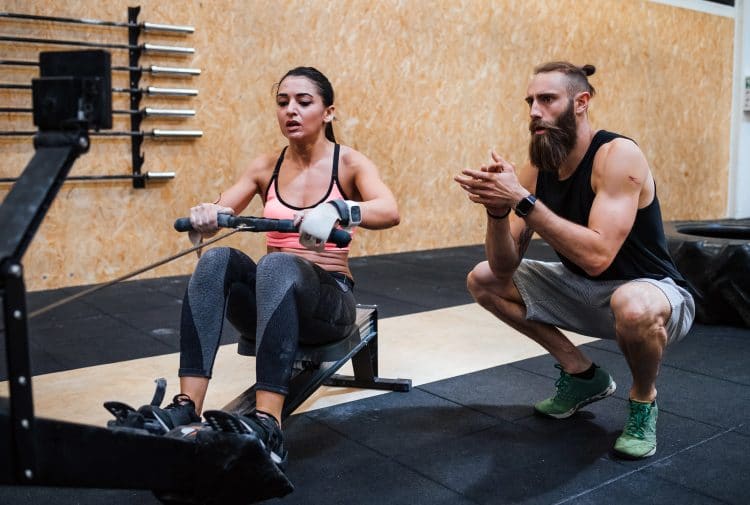 Both air bikes and rowers are suitable for longer, lower intensity workouts, but rowers may be better. Rowers are more comfortable for long workouts, and the rhythmic motion helps make things more enjoyable and sustainable. People have been known to do full 26 mile/42km marathons on rowing machines.

Air bikes often start to become uncomfortable after 15-20 minutes of continuous use, which can be very distracting. Air bikes have wide seats and are also very noisy, which means that long workouts are less enjoyable.

So, if you want to work on your long-distance fitness and endurance, a rowing machine is probably your best option.

If you are thinking of buying an air bike or a rower for your home gym, you need to make sure that you have enough space to use your chosen machine.

Rowers are long and narrow, but most can be stood upright when not being used. Many can be separated into two parts for even easier storage.

Air bikes are shorter, but there is no way to reduce their footprint for storage. Most rowers and air bikes have built-in transport wheels, so you can easily tilt and roll them from place to place, but neither can be described as portable.

Winner: Air bikes are more compact, but rowers are easier to store, so it’s a draw!

Air Bike vs. Rower: Which Is Best?

On paper, it looks like air bikes have got the rower beat in all of the most important categories. However, that’s only part of the story and may not reveal which one of these two great machines is best for you.

The one thing that can’t be measured is user enjoyment, and that’s arguably the most important consideration.

For example, while the air bike is arguably best for burning calories, if you prefer rowing and are more inclined to row for longer and more often, you’ll get better results even though air bikes came out on top.

So, if possible, try and spend some time with an air bike and a rower to see which one you like the best. Because of individuality and your personal preferences, the “wrong” choice could actually be the best option for you!

Whichever one you choose, and providing you use it often enough, air bikes and rowers are both awesome training tools that you can use to get fit, burn fat, and get healthy.