Levan Saginashvili comfortably beats one of the greatest arm wrestlers ever, Devon Larratt. 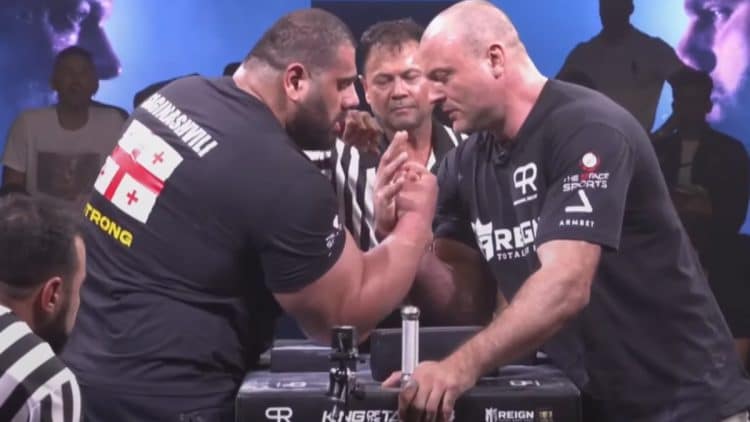 Coming into this match, Devon Larratt was on a 10-win streak, having not lost a match since 2018. The 47-year-old Canadian earned his title of the world’s greatest arm wrestler a long time ago, and is also one of the sport’s greatest ambassadors and entertainers. However, unluckily for Devon, Levan Saginashvili is just a different beast right now, and it seems like there is no one that can match his abilities. Levan’s dominance is demonstrated by the fact that he hasn’t lost a round in his last six fights including the match with Larratt.

It was clear from the start that Devon Larratt would not be able to counter Saginashvili’s power, despite coming in a lot heavier than usual. The match lasted over an hour and a half, so Devon still did put up as much as possible and fought until the end. However, it seemed that after round two Devon walked away from the table with some kind of injury. He continued to fight, but was ultimately unable to take even a single round.

You can watch the match highlights here:

It is a very rare sighting to see Devon Larratt lose by a margin this big, so it was also interesting to see his post-match reaction. He took the loss quite well and congratulated Levan Saginashvili for his greatest victory yet. Devon praised his opponent a lot in his new YouTube video, which he filmed sitting on his balcony chair all wrapped up.

“To my competitor, Levan Saginashvili. WOW, WOW. Different level man, never felt anything like it, and I know I was ready. So, nothing but respect to the champ, legacy hammer holder, number one arm wrestler in the world, and a very funny and cool guy, Levan Saginashvili. Honored that I got this match with you, honored that I got to represent North America and face you, but you are WALKING TITAN man.”

After losing the match, Devon Larratt passed on the ‘Legacy Hammer’ to Levan, which was made to be held by the greatest arm wrestler in the world.

As impressive as it was to see Devon accept defeat with such grace, it wasn’t the first time he had done so in such a manner. It is also noteworthy that he displayed exemplary sportsmanship after losing a boxing match to Hafthor Björnsson by KO in the first round. Devon appeared in that match as a replacement for Eddie Hall, who suffered an injury shortly prior.

With this win, Levan Saginashvili has started a new era in the sport of arm wrestling, and by the looks of it, he will be the main character for time to come. Devon Larratt will now take some rest over the summer and probably think about his next steps.

Larry Wheels is known for powerlifting, but he has been getting some valuable experience in his arm wrestling career. After...

Between powerlifting, bodybuilding, strongman, arm wrestling, and more, it is safe to say that Larry Wheels knows a thing or...