Alexis Johnson will unfortunately have to sit this one out. 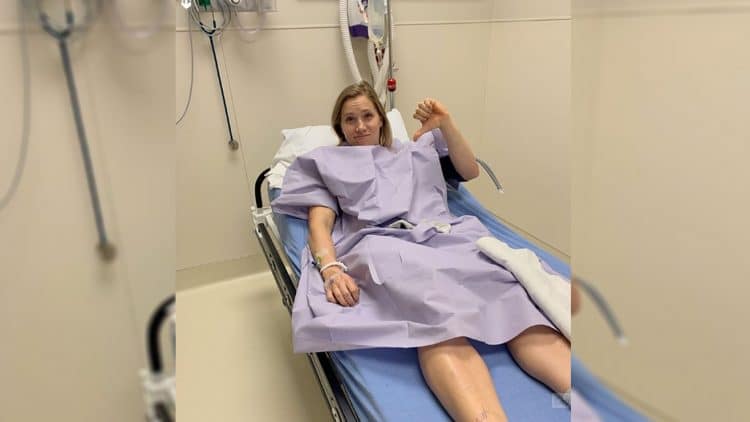 Injuries are always a bummer which was the case for Alexis Johnson who completely tore her right Achilles tendon on Tuesday during box jumps, and as a result, she’ll miss the rest of the 2020 CrossFit season. But no time was wasted as she had surgery the very next day which means she’s already on the road to recovery although it’ll be a tough one.

“Oh how life can change in an instant.
Tuesday morning, on my 86th box jump, I felt like I got sniped in the back of the heel. I fell to the ground, my ankle felt weak and I crawled my way across the gym floor. I felt the back of my heal, and sure enough, there was a hole, and nothing was attached. I completely tore my right Achilles.

Sounds like it was a pretty bad injury which is probably why she explained that the road to recovery will be a long one although she’s just thankful to have been able to get surgery as soon as she did.

Thanks to some amazing people in my life (@cmj027 @baileylb2001 and @morganmoedean ) I was able to get into surgery the next day. And thank you to everyone that has reached out with incredibly kind words. You’ve brought so many smiles to my face. And to my sponsors @fitaid @ilikechike and @misfitathletics who continue to stand by my side and support me. The road to recovery will be long, but this is just one more challenge to overcome. I’ll be stronger because of it.”

Alexis Johnson started CrossFit back in 2013 after having an eating disorder that drastically reduced her weight to just 88 pounds. A year later she qualified for the South Central Regional, then eventually placed 31st in her first CrossFit Games appearance in 2016. She came in 33rd the following year and placed 6th in a team (Don’t Stop) competition in 2019.

Now, since Johnson was with Team Odd Squad (Emily Tanner, Brandon Luckett, and Jordan Cook) when they qualified for the 2020 Games last year at SouthFit, McKenzie Flinchum (placed 50th in 2019 Games which was her debut) will now take her place in Madison Wisconsin per the rulebook as she was named as an alternate.

Team Odd Squad also just accepted the invitation last week and although team captain Alexis Johnson won’t be there, she remains optimistic for her recovery and will still be cheering on her team. Hopefully, though, she’s fully healed and ready to go for 2021.