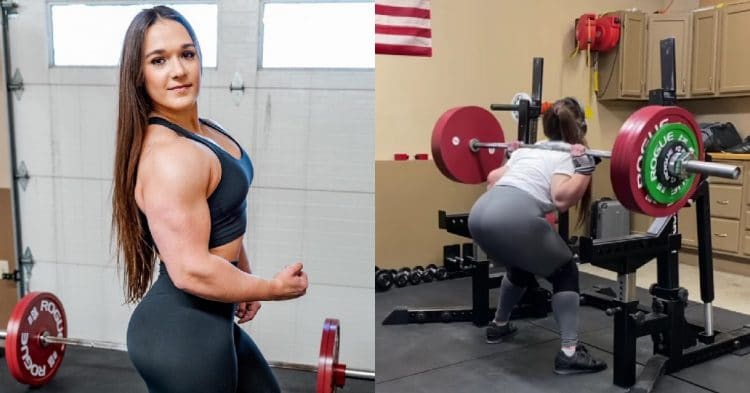 Amanda Lawrence has not been deterred at all by having to stay indoors. In fact, if her most recent training session is any indication, she is getting some of her best work ever without stepping foot in the gym.

Lawrence is one of the most impressive young powerlifters in the world right now, regardless of gender. At just 22 years of age, this -84kg athlete has already captured IPF world records for her squat and deadlift. At such a young age, she is still rapidly improving, so even those records will likely not stand for long.

In fact, Amanda Lawrence has been working hard on breaking those records, even during this global health crisis. While she has been seen working on her deadlifts in a garage, this is not her only home workout setup, as she showed on Instagram recently. This time around, she is doing squats inside, and hitting some pretty impressive numbers. Not only did she crush a giant 551lb single, but she also ripped through three sets of 496lb for five reps.

“It’s a proven fact that yelling before your set adds an instant 50lbs, iť’s Science 😂

This is not the only impressive squat work Amanda has been doing lately. She is not afraid to move her squat rack in the garage with for some training. Here she is a few weeks earlier, doing a strong 545lb single, while sitting at 187lb bodyweight.

Amanda Lawrence never ceases to amaze us with each and every performance, whether in training or in competition. When everything starts going back to normal in the world, it will be interesting to see how she looks in a competitive setting. Judging by how hard she has been working lately, she will surely look like a different level of athlete when that time comes.