It won't be easy but you'll be able to hold a plank for three minutes at the end if you couldn't before! 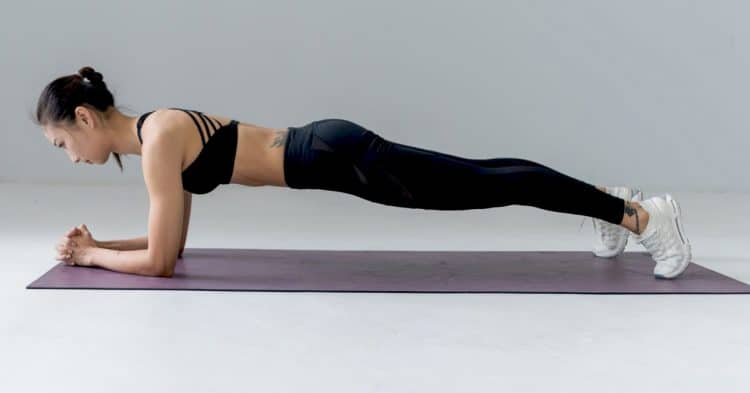 Planks are a common exercise for improving core strength and development. It also provides benefits for the hips, shoulders, spine, and posterior chain (backside of the body). Plus, it helps to improve full-body stabilization (when done properly).

So if your goal is to be stronger, better at athletics, prevent injuries and reduce pain, planks are a recommended addition to your daily regime.

Now, for this challenge, the longest you’ll hold a plank is three minutes (last day of the challenge). And by practicing planks every day, you’ll be able to do this easily, in no time. If you don’t have much experience with planks, then this might sound difficult simply because we’re proposing it as a challenge. But you should know that the world record for a plank is 8+ hours, which was achieved by 62-year-old marine George Hood in February 2020.

We’re not asking you to attempt to hold a plank for anything remotely close to that and most people can do this. So… you ready?

Read: Crunches vs. planks: The best exercise for ripped abs

This challenge was actually created by top U.K. based fitness influencer Paul Olima. It consists of doing basic planks at first, followed by a combination of variations (walking and Superman planks) for the remaining duration of the challenge. You’ll start small and work your way up to a three-minute plank which will be the last test on day 30.

More advanced exercisers probably won’t find this difficult at all but it’s great for those newer to training or for those who just want to switch things up a little. Feel free to test yourself with longer holds following the 30 days and implement new variations to continue to challenge yourself.

Here are the details of the challenge…

How To do An Effective, Basic Plank

The basic (front) plank is a simple exercise that involves holding one position.

How To Do The Walking Plank

From the information we have on this exercise based on how it’s done in the program, this plank variation involves going from a basic plank to a high plank or starting position for a push-up. Then, you’ll return to the basic plank position and repeat for the prescribed time.

We understand there may be different names for this variation.

How To Do The Superman Plank

There are several variations and examples of the Superman plank. But for this challenge, you’ll do the variation which involves starting from a basic plank or high plank position and alternating sides. And we’ll use the former variation for exercise instructions.

Perform the exercise on each side for the prescribed time. For example, if the time is 15 seconds, then hold the position on one side for 15 seconds then repeat this for the other side.

What are the benefits of the plank?

The plank is most commonly used as a core muscle developer. However, it also improves full-body stabilization and posture, which is important for physical activity and even preventing injuries.

That doesn’t mean the plank is the only exercise you should for these benefits and it shouldn’t be. But it’s a great addition to any exercise regime.

Is the plank better than crunches for getting abs?

The plank is arguably the more functional exercise and it does improve the appearance of the midsection. But crunches are indeed an effective exercise for building the ab muscles.

Include both for overall improved core development.

Are planks safe for everyone?

Yes and no. It depends on your structural health and if you have any physical condition that causes you regular pain, you’ll want to avoid the plank.

On the other hand, if done correctly and how explained above, the plank is a very safe and effective exercise.

How long should I hold a plank for?

The question really should be, how long can you hold a plank for? This will, of course, vary between individuals and if you can hold a plank for several minutes then have at it.

Just work up slowly though because planks can make you extremely sore if you go all out at first.

That’s it! Take on this 30-day challenge and you won’t only see improvements in core strength, but you’ll probably see visual improvements as well. Not to mention, you’ll reap the postural benefits along with improving total body stabilization.

This can translate into your other exercises and activities which makes it totally worth it. We understand that holding a plank for three minutes may not pose a challenge for more advanced exercisers. But for anyone else looking to improve, it’s perfect!

The front plank is arguably one of the most popular abs exercises around. Planks are an isometric exercise, which means...

We’re all familiar and then some with the plank exercise. With the recent resurgence of the traditional plank many variations...

Cankles, bingo wings, bubble butt, moobs – these are all slang terms for areas where fat can accumulate. While these...