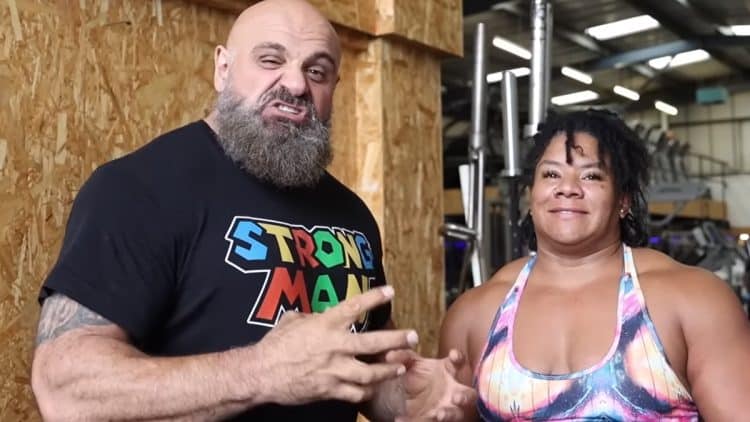 Andrea Thompson is making her comeback for the Strongwoman history books. Since March, Andrea hasn’t competed, but she’s now preparing for some very brilliant performances. In order to achieve the best results, she enrolled herself in a few training sessions with her coach Laurence “Big Loz” Shahlaei. On his YouTube channel, Big Loz has shared the video footage from their training sessions.

Andrea Thompson is currently preparing for the 2022 World’s Strongest Woman (WSW) contest, which is set to take place in December. This is one one of Andrea’s main priorities this year, but she also has some goals to accomplish beforehand. One of which is to set a new Log Lift World Record. This is exactly what she is working on with Big Loz, who has extensive experience in the coaching field.

Big Loz shared two 30-minute videos on his channel, which displayed one training session each. The first one was a lighter leg session which the duo started with some cardio. Big Loz got on the treadmill, while Andrea did her part on the bike.

They then moved on to squats, where Andrea crushed multiple sets of 150 kilograms (330.7 pounds). Some more high repetition sets took place on two variations of the leg curl machine. The second-to-last exercise was a drop set on the leg press, which blew their legs up. To conclude, the leg extensions were Big Loz’s and Andrea Thompson’s leg day finishers.

According to Big Loz and his wife, Andrea Thompson has an incredible amount of potential, but she needs to push herself even harder. However, they did acknowledge that Andrea had to put years of hard work in order to get where she is now.

However, in the second video Andrea Thompson and Big Loz focused on the log lift. In turn, they announced Andrea’s World Record attempt. She will make the attempt at the 2022 World Log Lift Championships, which will take place on October 9th, in Ipswich, UK.

The current record of 135 kilograms (297.6 pounds) is in possession of Andrea Thompson already, since she set it at the World’s Ultimate Strongman ‘Feats of Strength’. She will now attempt to further improve it by 2 kilograms (4.4 pounds) and maybe even more.

Andrea Thompson and Big Loz worked up to a massive 122-kilogram (269-pound) log and performed three sets of one rep. Loz worried at one point that he would not be able to keep up with Andrea, but somehow managed to do it.

Straight after finishing up the log lift, Andrea Thompson and Big Loz moved on to the Viking Press, which could make an appearance at the 2022 WSW. They first slowly built up to a heavy triple, but Loz then surprised Andrea and tasked her with an endurance set. She completed 15 reps, which proves that her shoulder strength is unparalleled currently. With the main part of the session being done, Big Loz and Andrea only completed some more accessory work to keep the body mobile and injury free.

“We’re getting close to competition, so we bring the volume down. We are going to do some fluffy stuff now… just a couple of movements to work on rear delts and rehab type things.”

Andrea Thompson has taken part in 11 professional Strongwoman competitions in which she managed to get one victory. However, it was the greatest title in the sport since Andrea became 2018 World’s Strongest Woman. She is now looking to repeat the success with the guidance of former Strongman, Big Loz. He definitely knows how to do his job, seeing that he recently guided Mitchell Hooper to his first Strongman victory as well.

Andrea Thompson did not do too many exercises in either of the two videos, but she did lift some very heavy weights. According to the insight from the duo, it is very likely that Andrea will significantly improve the log lift record, but it may not take long before we find out.