The 2022 Mr. Olympia competitor Hunter Labrada shares tips on how to get bigger arms. 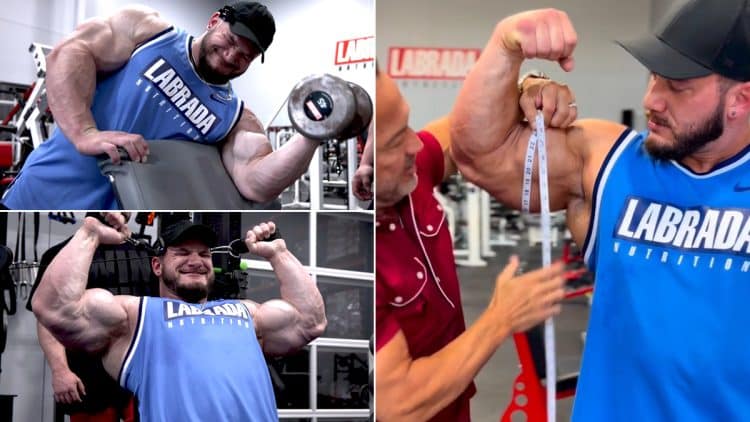 The Labrada Scion began his competition preparations for the 2022 Olympia in August, and he will seek to dethrone Big Ramy at the event. During a recent workout, he worked his arms and hamstrings. So without further ado, let’s check out Labrada’s training session.

Hunter Labrada started the arms workout with one of the best isolation moves for the biceps – preacher curls.

“I’ll do these literally every arm day because I believe it’s very optimal to train your arms with them.”

Labrada stated that using the pad to rest the elbow as some kind of pivot point is a fairly common mistake he has seen a lot of people make. He demonstrated the correct way to position the arm which is to allow the entire tricep to rest against the pad and keep the shoulder locked in on top for maximum biceps isolation.

“As you curl through, you want to think about finishing pinkies up,” Labrada added.

The Labrada Scion performed a few sets of this exercise unilaterally and went on to work the triceps with the next movement.

Labrada explained the correct technique to do this exercise in a profound manner and said:

“We’re gonna try and do our best to keep the cable, pulley, your wrist, elbow and shoulder all in the straight line. It’s going to offer the best joint alignment for this exercise, help us lock it in.”

“Other thing you really want to pay attention to is keeping everything frozen except your elbows. So really getting your shoulder locked down back and keeping your lat active to hold everything down. So really give yourself a sound foundation through which to produce output.”

Labrada did this exercise unilaterally. He performed a couple of warm-up sets of this exercise to get the blood flowing into the triceps and moved on to the next exercise after a few working sets. For the warm-up set, Labrada advised to use approximately 50 percent of the weight you would use for the top set.

Labrada next took to this variation of cable curls to target the biceps. While explaining the reasons behind performing preacher curls followed by this exercise, the 2019 Tampa Pro winner said:

“We started out on that dumbbell preacher curls, really working things in the shortened positions to overload the muscles. Coming here, really working from a lengthened position… Your arms are slightly pulled back. That’s all we’re after – that little bit of tension at the bottom (of the biceps)… It’s peak resistance from the onset of curl and then drops off pretty significantly as you curl through the motion.”

Labrada performed a few sets of this exercise and jumped into the next triceps exercise of the day.

This helps target the long head of triceps (the triceps brachii) to a greater extent. Additionally, this variation also offers the two most important factors for triceps isolation – stability of shoulder joint, full elbow flexion, and the alignment of pulley, cable, and all the joints.

The Labrada Scion performed a few sets of this exercise and wrapped up the arms training to do the hamstrings work.

While explaining the current workout split for hamstrings, Labrada explained:

The Open division roster at 2022 Olympia is filled to the brim with elite-level competitors. While young contenders like Hunter Labrada and Nick Walker have firmly established themselves at the top echelons, veterans Big Ramy, Brandon Curry, and Hadi Choopan are still at the top of their game. On the other hand, the addition of Blessing Awodibu, Andrew Jacked, and Olympia 212 champion Derek Lunsford has increased the difficulty level even further. It will be interesting to see how Hunter Labrada retains his place in the top five and improves further when Olympia returns to Las Vegas from Dec. 15-18.