The eight-time Mr. Olympia discussed this year's Men's Open division, Dorian Yates, and his relationship with the creator of Mr. Olympia Joe Weider. 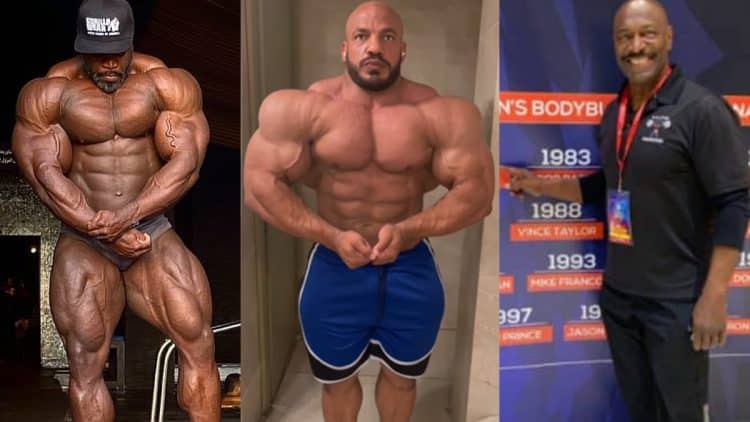 Bodybuilding legend Lee Haney proved himself on the sport’s most prominent stages during his illustrious career. In a recent video, Haney discussed Brandon Curry‘s chances against Big Ramy at 2022 Olympia before reflecting on competing against six-time Olympia winner Dorian Yates.

“He’s [Brandon Curry] got to be careful he doesn’t get into the size game. Nobody is going to outsize Big Ramy, you can forget that. It’s not going to happen,” Lee Haney shared.

Lee Haney shares the all-time record for most Mr. Olympia titles ever earned with Ronnie Coleman. He led a successful career that spanned from the late 1970s to the early 1990s. Just like Coleman, Haney managed to win his eight titles in a consecutive manner. Haney has shared the stage with iconic bodybuilders such as Lee Labrada, Shawn Ray, and Rich Gaspari.

Despite hanging up his posing trunks, Haney is still a major figurehead in the sport. While he once ruled the Men’s Open category, he believes modern bodybuilders today lack the detail that his era was known for. Last year, Haney elaborated on that observation. He shared that athletes have more size but don’t possess the granite conditioning that was so prevalent during his years of competition.

This year’s Mr. Olympia is shaping up to be a historic event. Reigning two-time champion Big Ramy is determined to retain his title. His physique updates would suggest he’s well on his way to making that goal a reality. However, Haney isn’t ready to write off former Mr. Olympia winner Brandon Curry, who secured the coveted title back in 2019.

Lee Haney on 2022 Mr. Olympia: ‘Only Way to Beat the Champion Is to Knock Him Out with a Sledgehammer’

In a recent video with Dennis James, Lee Haney explained that in order to topple Big Ramy, someone will have to bring a package so ‘detailed’ and ‘mature’ that it serves as a knockout punch to the champion.

“What you have to do, and if the judge’s eyes are on that is create more muscle quality, more muscle separation. If Brandon can do this, and he gotta do it well — that’s the only way you can knock out the champion. You gotta hit them with a sledgehammer. That’s the only way you’re going to dethrone him. But he’s what I see now, as far as within the top two or three.”

Haney was impressed with the ‘beautiful physique’ of Andrew Jacked but said he was most impressed with third-place 2021 Olympia finisher Hadi Choopan‘s package last year. He believes Choopan had the best conditioning and muscle maturity out of anyone who competed.

“Yeah, I’ve seen him — beautiful physique. You know, great separation, I liked him. I saw him here recently. He just won in the UK correct. Yeah. Looks very good. I liked his muscle separation, muscle maturity.

I tell you what: I saw Olympia last year. Hadi [Choopan] had the best muscle maturity on stage that day, period. I would put him up close to that. You don’t know until you see these guys standing side by side. It’s hard to tell until you see them on stage together.”

According to Haney, he respected Dorian Yates, who ushered in a new era of bodybuilding that focused more on sheer muscle mass instead aesthetics.

“Listen, as I said, our year I thought was magic. You’re looking at muscle separation. Chris [Cormier], yourself — that’s bodybuilding. I respect Dorian [Yates] he was a great champion. In my eyes, what I saw during the 90s part of the Olympia when you, Shawn, all of you guys were there. That was beautiful muscle. Muscle separation, muscle maturity, incredible presentation. It was all of that.”

Haney had a solid relationship with Joe Weider, the creator of Mr. Olympia. While the two disagreed about some things, Haney never questioned Weider’s passion for bodybuilding.

“I’ve eaten at his house before, him and his beautiful wife. They’re just beautiful people to meet. And we had some discussions. Nothing heated but we had some different discussions. I saw things my way. He saw them his way but I understood. We understood each other and I understood him. I missed Joe being in there, and his way of thinking about bodybuilding because there was a passion and a love for it.”

The eight-time Mr. Olympia misses Weider’s presence in the organization and feels like the show has become too commercialized.

“The magic and the mystique — I think it’s been a bit lost. I really do. Not saying totally, but just the magic of it. Joe would bring all the Olympias together. I will never forget that big picture we took together. You know, Arnold [Schwarzenegger] and everybody’s there — that hasn’t happened since Joe has been gone.”

“To get back to that, I don’t know. I think it’s gotten a bit too commercialized now,” says Haney.

Haney likes to compare today’s sport to what it was like during his prime years of competition. Unlike his era, Haney says becoming a Pro wasn’t a “cake walk” like it is in today’s bodybuilding climate.

With the emergence of social media, the sport has certainly undergone some major changes. While he favors qualities like muscle maturity and separation, Haney believes it will require a massive effort to knock Big Ramy off his throne later this year.