The Strongman legend offers his best training tips and advice for the big event. 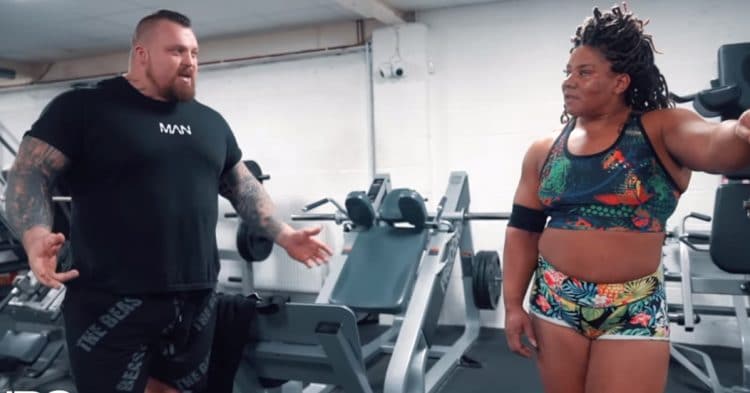 And if there’s one individual who could help her perform at her best it’s one of the most impressive human beings on the planet in Eddie Hall who holds the all-time deadlift world record and more.

So Thompson talked a little about her progress and current regime before they got into the workout where Eddie hall offered his best tips.

They started off with the yoke into the farmer’s walk. Hall explained:

“Where you’re gonna win or lose this is the transition from throwing that yoke down to picking the farmers up“.

He then gave her some very valuable advice which was to make sure she gets the starting position right. He mentioned not to let the ref pressure her…

Then onto the technique. Hall told Thompson to keep the weight close which saves time plus go as narrow as possible. The transition from the yoke into the farmer’s walk is of utmost importance he explained. Next, time to put it all to the test.

Thompson quickly made it down the gym with the yoke, then had a bit of a fumble before completing the farmer’s walk without a hitch. Her time was 14 seconds which wasn’t bad but they both know the little fumble cost her some time.

“You’ve got to be so aggressive when you throw that yoke down, you want to push it away from you and use that push to push into the farmer’s. You might be the strongest girl there but it’s always about who’s the fastest about that transition,” explained Hall.

She had another go and did it 1.5 seconds quicker by making the recommended adjustment. Next event… tire flip.

Hall offered some great advice for the tire flip and talked about how important it is for finding that perfect grip.

He then advised jumping over the tire to save time rather than running around it. He also showed how it’s important to guide the tire with your weight after each flip to prevent it from wobbling all over the place.

For the dumbbells Press, Hall went over the rules with Thompson and then she went straight into the lift. She predicted that she’d get more than 5 reps with a 63kg dumbbell. Hall wanted her to aim for 7. Thompson said the winner in this event would usually get about 10 reps so that’s good information to know.

“Where people lose a lot of time is they’ll press it, let go, throw it down, it’ll roll about and you got to go chasing it like a rugby ball. I would advise keeping your hands on it at all times. Ten reps is a lot of reps to get in 60 seconds.”

He then went a little deeper into the technique he recommends for optimal performance. Thompson managed to get 10 reps in 43 seconds. Hall’s only advice to her was to look at the refs rather than looking up. They’ll give her the down signal quicker this way.

They trained with the Elephant bar next and we already mentioned that she outperformed in this event with 621 lbs which was a record. No wonder Hall didn’t have any tips as she was flawless with this lift.

Thompson mentioned that she has a number in her head that she’s aiming for which was 280kg/ 617lbs. Well, she obviously surpassed that number. He only told her to watch out for the whip at the top but the Elephant bar has a good track record with Strongman athletes achieving personal bests.

“There are a few little tips and tricks we can do here to screw the other competitor over, and it makes a big difference,” Hall said. His advice was to purposely throw the stone off-center so it rolls around a bit. As a result, the other competitor has to re-center it to throw it back over. This would allow Thompson a little more recovery between lift.

His next piece of advice was to get the stone over the bar as quickly as possible.

“As soon as that stone lands, you don’t want to be standing here taking breaths. You want to be straight on it, put it back over as quickly as you possibly can to keep the pressure on them because they won’t be expecting it.”

After the session, Eddie Hall pretty much reiterated how important it is to be quick. He himself won the World’s Strongest Man by one point so all of the little tips and tricks can make a huge difference.