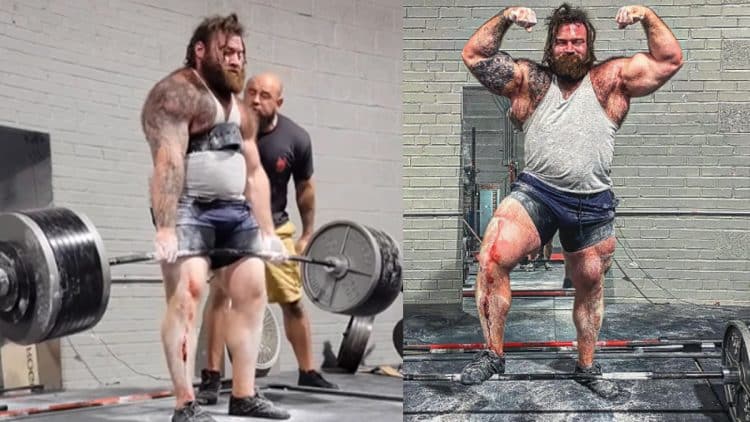 Powerlifter Andrew Hause is growing stronger with every training session in his gym. Just a few days Andrew squatted 467.8 kilograms (1,031.4 pounds) with knee wraps, which is one of his all-time greatest lifts. However, Hause has now reached new heights in the deadlift event, since he crushed a 420-kilogram (925.9-pound) pull for a new PR.

Andrew Hause’s 420-kilogram (925.9-pound) deadlift was raw since he only used a lifting belt to aid him. He set his lifting belt unusually high, just underneath his chest, but that obviously works best for him since he is able to lift this much weight. The bar scratched some of Andrew’s skin on the pull, causing blood to ooze from his right shin and quad.

This is a 50lb improvement from what I pulled on the platform last year. Huge total coming!!”

Andrew Hause is currently weighing in at around 285 pounds (129 kilograms), but plans to add a few more pounds in the upcoming weeks. He is preparing for the 2022 WRPF American Pro, which will take place on July 29-30, in Manassas, VA. Andrew’s hopes are to compete in the 140-kilogram weight class and maybe break some World Records. He is very close to setting a new Raw With Wraps Total World Record. Eric Lilliebridge currently holds that record, as he totaled 1,115 kilograms (2,458.2 pounds) at the 2016 UPA Iron Battle on the Mississippi.

Speaking of Eric Lilliebridge, Andrew Hause’s recent feats of strength seriously impressed the current record holder, so he left a comment. It is reasonable, as Andrew is the first man in six years to be a real threat to his record.

“Freak! Congrats man you’re going to put up a huge total in 3 weeks. Can’t wait to see it!” wrote Lilliebridge.

Andrew Hause has taken part in only six sanctioned competitions throughout his six-year-long powerlifting career. He won every competition, so he is currently on a 100% win rate. Andrew competed in the Junior division until now and holds the All-Time U140KG Squat & Total World Records in that age class.

*Andrew Hause set all of his competition PRs at the 2021 RPS The Showcase Super Classic.

Andrew Hause will step onto the powerlifting platform in just two weeks and his performance will be highly anticipated. If he manages to repeat his recent lifts from training, breaking the U140KG All-Time Raw W/Wraps Total World Record will be a piece of cake for him.  Clearly, Andrew’s planning is impeccable, since he is successfully reaching his peak shape as the 2022 WRPF American Pro is nearing.