Hunter takes viewers through an intense back workout on road to the 2022 Olympia. 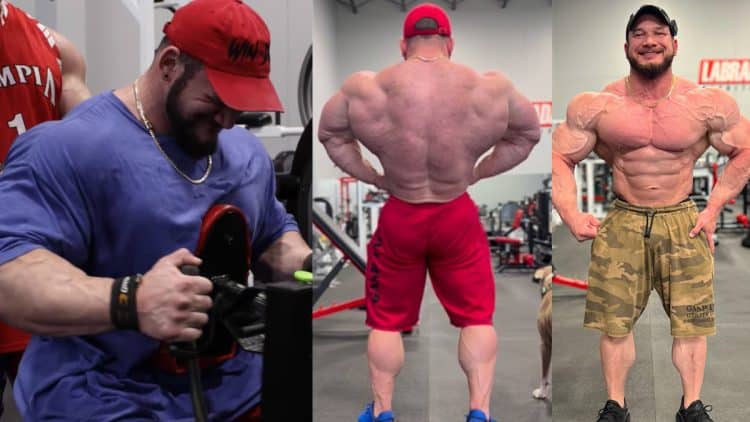 While Men’s Open division bodybuilder Hunter Labrada is in off-season right now, he is training hard to prepare for the Mr. Olympia event in December 2022. In his latest YouTube video, he shows off his most recent back workout, explaining each exercise and variation in detail.

Hunter Labrada made his pro debut at the 2020 Tampa Pro and won the show to qualify for his maiden Mr. Olympia, where he secured a respectable eighth-place finish. He returned with a better physique and moved up four ranks at the 2021 Olympia to earn the fourth spot.

The 2022 Mr. Olympia frontrunner performed the following exercises in the workout:

Hunter and his training partner, Jordan adjusted the bench near the cable pulley machine for the exercise. The bodybuilders performed the reps with a slow, controlled, and full range of motion (ROM), ensuring optimal muscle fiber recruitment.

“The biggest thing with these is we want to keep an active range of motion.”

In the video, he demonstrates finding the active range of motion (the ROM within which you can move a target muscle without recruiting secondary muscle groups) for the exercise. He externally rotates his arms with his thumbs pointing outwards and raises them as high as possible without allowing his elbows to flare.

Their next exercise was a single-arm pull-down performed on a Nautilus machine, which helps train the lats unilaterally.

Hunter used weight lifting straps for the exercise. The grip for pull-downs is important as it can influence the amount of tension placed on your lats and forearms.

“If you don’t have this piece, there are a bunch of other great options. We actually do the other one that I would recommend in another pull day, which you all will see eventually, but it’s you know, just the unilateral cable set up off of a cable. You can also do the underhand hammer unilaterally or the hammer high-row with a handle looped around.”

After completing their sets on the Nautilus machine, the men’s open division bodybuilder and his training partner moved to their third exercise. The T-bar row works the lats, traps, rear delts, and rhomboids.

Hunter focused on dropping his chest slightly and wedging himself on the chest support for better muscle recruitment. Additionally, he maintained a natural arm path where his elbows were neither flared nor too close to his torso, enabling him to feel better while doing the t-bar row.

Hunter and Jordan move to the machine Prime row next. Hunter performed each rep with total control, and Jordan helped him focus and establish a mind-muscle connection by tapping the target muscles during his set. The duo keeps their elbows close to their sides while performing the exercise for better lat engagement.

“Focus for this exercise is to really load the length and position of our lats. So, you know that being said, you’ll see us, we have a neutral grip; we’re focusing on keeping the elbow tucked, especially in the stretch and then because it’s a bilateral exercise and we are big, it’s hard for us to keep our elbows completely to the side.”

An additional tip from Hunter for the Prime and T-bar row is to allow the scapula to move as much as possible. Per Labrada, the idea is to let it move around the rib cage as it enables full protraction and contraction.

Hunter and Jordan finish the workout with rear delt flys on the pec deck machine.

He clarified that even though the real delt fly primarily focuses on the traps, it makes more sense to work on them on a pull day rather than a push day. Moreover, the other exercises in the workout had already activated the muscles surrounding the rear delts.

Check out Hunter Labrada’s back session below:

In the run-up to the 2022 Olympia, the bodybuilder plans on training his chest and back at least twice a week. He aims to put more emphasis on bigger muscle groups but will keep leg workouts limited to one day a week.

Hunter Labrada is following his newest eight-week split to develop his physique during the summer. Following this, he will begin his 2022 Olympia prep with the goal of securing gold. 2022 Olympia weekend is scheduled for Dec. 15-18 in Las Vegas, NV.

Weight Management 101: How to Calculate Macros