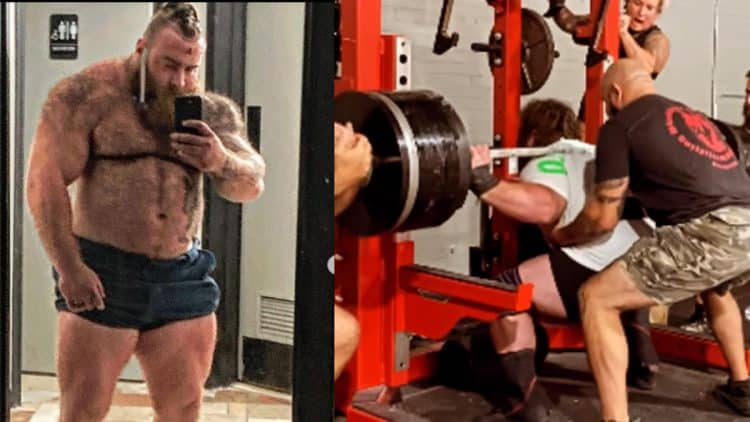 Having been one of the strongest Junior powerlifters ever, Andrew Hause is now transitioning to the Open age division. Recently, he showed off some impressive strength that makes him look like a favorite to compete against the best. Andrew’s squat has always been his most impressive lift, and his latest one is no exception. He performed a mind-blowing 467.8-kilogram (1,031.4-pound) squat with wraps PR to Instagram.

This lift from Andrew Hause is 11.3 kilograms (25 pounds) heavier than his previous squat with wraps personal record. His bodyweight at the time of the lift was 128.8 kilograms (284 pounds), while he usually competes in the U140-kilogram weight class. Despite losing massive amounts of bodyweight in the past three weeks, Andrew still managed to push his boundaries by a significant margin. It did not come easily, as Andrew really had to grind through the last stages of the lift to lock it out completely.

“Had a rough week this week, body weight down to 284lbs today. Was shocked when I stepped on the scale. I lost around 14-16lbs in the past 3 weeks. Not intentional, and no excuses only gotta try to be bigger and better. Came in and worked up to a decent single of 1031.4lbs which is a 25lb PR for me. I’m not happy with how it moved and how shaky the descent was. I know I’m capable of more.”

Andrew Hause started professional powerlifting in 2016 and took part in six sanctioned competitions since then. He has won all six of them and claimed numerous Junior World Records along the way. He still holds the All-Time Squat and Total U140KG Junior World Record.

*Andrew Hause set all of his competition PRs at the 2021 RPS The Showcase Super Classic just more than one year ago.

After Andrew Hause scored all of his competition PRs and other records, he also proposed to his girlfriend. A lot of powerlifting fans enjoyed that wholesome moment, so it is safe to say that Andrew is well-liked.

Andrew Hause will take part in the 2022 WRPF American Pro. This is one of the greatest powerlifting meets on the East Coast, and it will take place on July 29-30, in Manassas, VA. Andrew has a couple of weeks before the competition to prepare for it, but from the looks of recent training sessions, he is going to do well.