Chris Hemsworth gave fans a sneak peek into how he carved out such a shredded physique for his latest feature film. 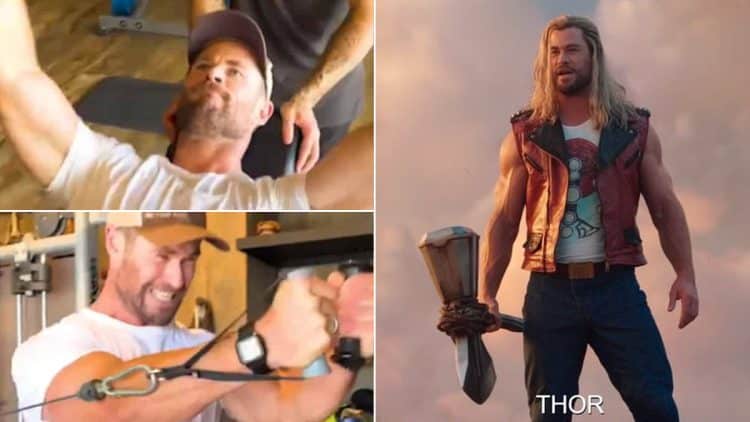 Australian actor Chris Hemsworth is recognized for having one of the fittest builds in Hollywood today. In a recent Instagram post, Hemsworth showed off a chest workout he used to pack on muscle for his latest Marvel project, Thor: Love and Thunder.

Hemsworth has been featured in several top-grossing action films throughout his acting career, like Thor, The Avengers, and Extraction. With the latest installment of Thor entering theatres this weekend, Hemsworth gave fans a teaser of the sacrifices necessary to pack on muscle and stay shredded for the movie role.

Having to adhere to dietary restrictions and intense training is nothing new for the famous actor. He looked ripped in Extraction and trained nonstop so his body would be up to par with what people would expect from a Black Ops mercenary. Hemsworth explained that he used bodyweight training to help gain additional weight for the movie role, focusing on speed, agility, and strength instead of using traditional weights.

Starting a fitness lifestyle app called Centrfit a few years ago, Hemsworth began sharing workouts and tips on how to live a happier and healthier life. The 38-year-old says that his fitness application has helped facilitate easier physical transformations for movie roles. Below, you can find one of his latest workouts used to build muscle for his role in Thor: Love and Thunder:

Hemsworth wastes no time and makes it clear from the get-go that this exercise routine will feature ‘lots of yelling’ and ‘lots of screaming’.

“We’re about to roll into a heavy chest workout, lots of yelling, lots of screaming,” he says in the video, alongside the help of trainer and Centr coach Luke Zocchi.

“I don’t care where you are, whether you’re at home, on a bus, on a train, or on a plane, I want to hear you yelling! So move it, get involved!” Chris Hemsworth shared.

During the video, Hemsworth suggested taking one-minute rests in between each set. He wasn’t short on energy during this workout. Perhaps the action star tried one of his favorite protein-based smoothies for a ‘caffeine-fueled experience’.

According to his coach Luke Zocchi, Hemsworth was forced to think outside the box last year for his latest Thor project because the role demanded so much muscle mass. In fact, Hemsworth’s trainer clarified that the Australian native was forced to consume up to ten meals a day to pack on the muscle needed for the role.

Some have brought up concerns about Chris Hemsworth’s ‘natty or not’ status. Popular podcast host, and comedian Joe Rogan jokingly implied that the famous actor’s body isn’t natural by saying ‘USADA’ for sure isn’t knocking on his door’. Nevertheless, Rogan acknowledged the hard work that goes into building such a defined physique.

Despite leading one of the busiest schedules in Hollywood, Hemsworth doesn’t miss an opportunity when it comes to maintaining his build. Thor: Love and Thunder is in theatres this weekend and fans will soon witness the transformation Hemsworth made possible with the help of his latest workout routine.

The off-season is an optimal time for a bodybuilder to build strength and size, and the 212 Olympia champion Derek...

Actor Chris Hemsworth has maintained one of the best builds in Hollywood for years. Hemsworth recently showed off insane bicep...

Andrew Jacked is one of bodybuilding's most exciting prospects this year. In a recent video, Jacked demonstrated a high-volume chest...

Brett Wilkin is quickly establishing himself as a household name in the pro-bodybuilding scene. Wilkin achieved his Pro card in...