In a show of strength, Branch Warren is staying active in retirement with a brutal leg workout: "ain't nobody going to tell me how to train!!!" 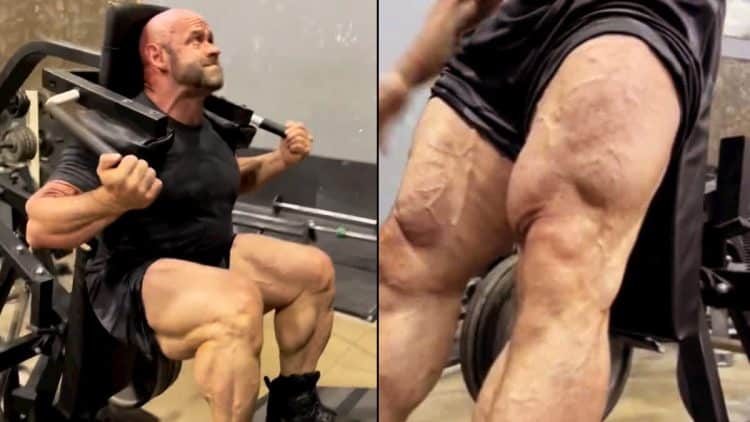 During the mid-2000s, Men’s Open bodybuilder Branch Warren stood out with a cement-cracking lower body and balanced proportions. In a recent video made to Instagram, Warren showed off his gains in retirement after hitting a demanding leg workout.

Warren quickly made a name for himself in the sport and found success on some of bodybuilding’s most prestigious stages. His impressive work ethic facilitated his rise to the top, and in 2009, Warren came incredibly close to becoming an Olympia champion. During the event, he managed to defeat 2008 Mr. Olympia Dexter Jackson but came up short against four-time Mr. Olympia Jay Cutler. For Warren, placing runner-up behind Cutler in 2009 was a hard pill to swallow considering the overall package he brought to the show.

Just a few years later, Warren secured arguably the most significant victories of his career after winning the 2011 and 2012 Arnold Classic back-to-back. While he came close to touching gold at Olympia, the Men’s Open competitor was unable to make good on that lofty goal before calling it a career. Nevertheless, Warren is celebrated for his consistency and performed at a number of Olympia contests throughout his tenure in the sport.

Warren decided in 2015 that he would retire from bodybuilding. Despite no longer competing in a professional capacity, Warren never misses an opportunity to push the limits inside the gym. He is respected for his longevity and even at 47 years old, the former Pro hasn’t slowed down in the slightest.

Branch Warren Gets Insane Quad Pump, Continues Training with Chip on His Shoulder

In a recent Instagram post, Warren shared a video of him demolishing machine hack squats at a fast pace.

“Ain’t nobody gonna tell me HOW TO TRAIN!!!!” Branch Warren wrote.

Some have criticized Warren’s commitment to intense training given that he retired years ago. Despite the backlash, the retired IFBB Pro has no intention of easing up in the training room.

The popular Men’s Open competitor believes nobody has the right to tell him ‘how to train’. As of this writing, Warren has yet to indicate interest in competing at a future bodybuilding show. However, at 47 years old, he undoubtedly has the work ethic and physique to make waves should he decide to return to a sanctioned competition.

Olympia President Jake Wood has expressed interest in seeing the Masters Olympia show return ‘definitely’ by 2023. Evidently, Warren would be an ideal candidate for the show even though he’s made it clear that he’s not preparing for a return to the sport.

The last Masters Olympia event was held in 2012, and won by one of Branch’s former opponents, Dexter “The Blade” Jackson. Wood also shared that the organization is still in the midst of ironing out a firm location and date for the expected event. Despite the possibility of the show’s return, Warren reaffirmed his decision to retire last year and said he had nothing left to prove after a successful 15-year career.

Warren is flaunting an incredibly conditioned physique seven years into retirement. Judging by his recent machine hack squat workout, the 47-year-old is making gains while focusing on longevity.