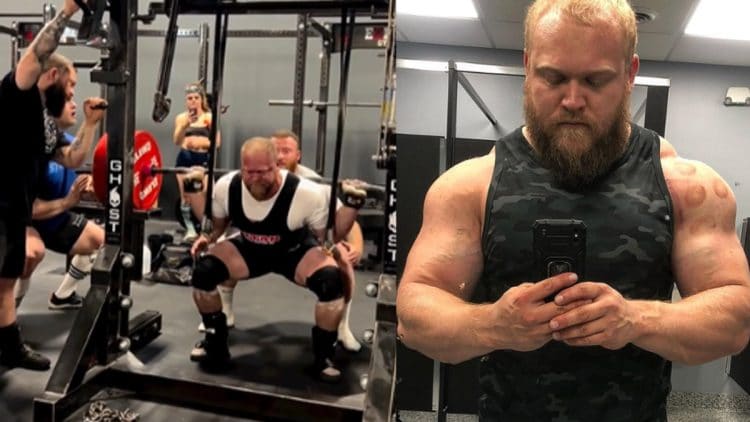 Powerlifter Phillip Herndon is quickly adding weight to his squats, as his next competition is just around the corner. Regardless of the division he competes in, he seems poised to break world records at his next competition. The Raw With Wraps seems to suit him just a bit better than the usual Raw division, which he proved in his recent training session. Phillip shared the video from that session, which displays a 455-kilogram (1,003-pound) squat with knee wraps.

Phillip Herndon already holds the U110KG All-Time World Record squat w/wraps, as he lifted 435 kilograms (959 pounds) at the 2022 USPC Mid-Atlantic Classic. Since his recent squat is 20 kilograms (44 pounds) heavier than that record, Phillip could easily go on to break it in a few weeks.

Phillip Herndon used knee wraps, wrist wraps, and a lifting belt to aid him in the 455-kilogram (1,003-pound) squat. The lift itself did not seem too hard for Herndon, but because it was a massive weight, his stability looked to be his biggest concern. It is not clear what his current bodyweight is, but he usually competes in the 110-kilogram weight class.

Phillip Herndon will be making an appearance at the 2022 WRPF American Pro, which will take place on July 29-30, in Manassas, VA. For the past two months, Phillip Herndon regularly performed raw squats and expressed his desire for claiming the World Record in that division. So, it was understandable to assume that he would attempt to do just that. However, seeing that Phillip is performing lifts significantly over the World Record in the Wrapped division, there is no way of knowing what will attract him the most.

Phillip Herndon possesses tons of experience coming into the 2022 WRPF American Pro. He has amassed a total of 23 victories in his 35 professional appearances. Furthermore, Herndon is currently on a winning streak, as he came out victorious in his last nine competitions.

Phillip Herndon has come out with some mind-blowing lifts from this preparation in the past few months. It is clear that he made some brilliant improvements overall, but his squat is once again the standout lift. Herndon has now reached a whole new level, so it seems like it will be hard for him to lose even on a bad day.