In the latest TikTok gym snafu, a fitness influencer has her dumbbells stolen from right under her bench. 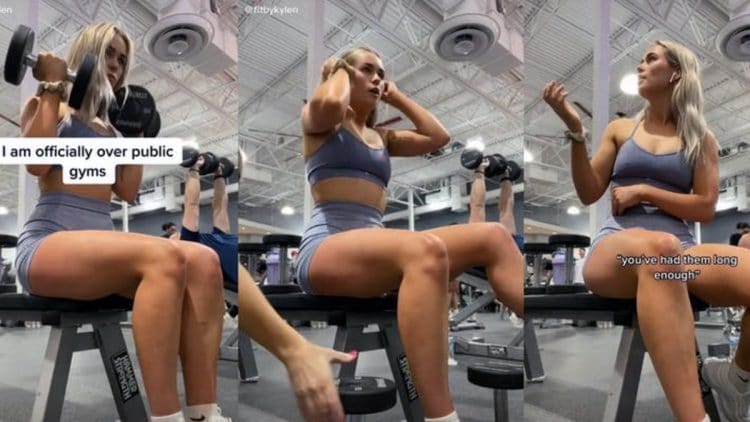 With the prevalence of social media, it seems every day there is a new viral moment at the gym engulfing the world’s attention. Fitness influencer and TikToker Kylen Suttner was the latest after her weights were stolen during an awkward gym encounter.

TikTok gym encounters are becoming a more common occurrence. In an age where everyone has a phone attached to their person, cameras are everywhere and often record people when they least expect it. Though sometimes, influencers take to streaming platforms to vent or complain, and it ends up coming back to bite them. This is precisely what happened to fellow Fitness TikTok influencer “Nicki Fitness” after shaming a man practicing drag curls.

Fellow fitness TikTok star Joey Swoll responded to Nicki Fitness who questioned why the man was using such an exercise. Citing one of the greatest bodybuilding coaches of all time, Charles Glass, Swoll explains that a drag curl is especially useful for taking tension off the deltoids to achieve a better pump in the biceps. Fortunately, at least this incident with Kylen Suttner just looks like someone was overeager and pushy in trying to get their hands on some dumbbells.

The video begins with an overlay stating, “I am officially over public gyms”.  As Suttner is practicing bicep curls with a pair of 15-pound dumbbells, she takes a rest while sitting down on a bench. While Suttner is taking a breather, her two dumbbells were snatched by a woman abruptly.

In response to the off-camera woman taking her weights, the TikToker says, “Oh sorry, I’m using that”. The accused lady says, “I’ve been waiting for these a very long time, you’ve had them forever.” When Kylen explains that she was almost finished with her workout, the lady reiterates her original stance by saying, “You’ve had them long enough”.

Commenters of the popular streaming app flocked to her video and gave their two cents on the awkward encounter.

“A guy literally tried taking it out of my hand mid set. Becuz he ‘couldn’t’ use the silver ones,” one commenter recalled.

“I literally had a guy do the same thing with my bench I was using,” added another TikToker.

“Oh hell no,” wrote another TikToker. “The other [dumbbell] would have been thrown at her head.”

One person asked Kylen what she thought the person who stole her weights should have said to her instead. To which the TikTok fitness star replied with, “They could find another pair of dumbbells!” She said the other woman “[could] report me to the front desk if they think I had them for an excessive amount of time,” noting that the action was “still a Karen thing to do.”

♬ Voice at seutaatiaitolu mix by positivefunny – 💡Happiness is an inside job💡

This is just the latest example of a gym encounter gone wrong featured on TikTok. While it’s unfortunate that this happened to Kylen, thankfully it didn’t escalate as some other incidents have in the past.

Fitness influencer Joey Swoll continues to use his social media presence to fight against toxic gym culture. In his latest...

Jessica Buettner Smokes 468.5lbs Squat Then Follows it Up With 4 Reps of 405lbs Paused Squat

The 2021 IPF World Champion Jessica Buettner has set some massive goals for this season, and judging by her recent...

Joey Swoll is a popular fitness influencer and consistently advocates for ridding the world of bad gym etiquette. In a...