Jeff Cavaliere of Athlean-X shares eight awesome shoulder builders to do at home. 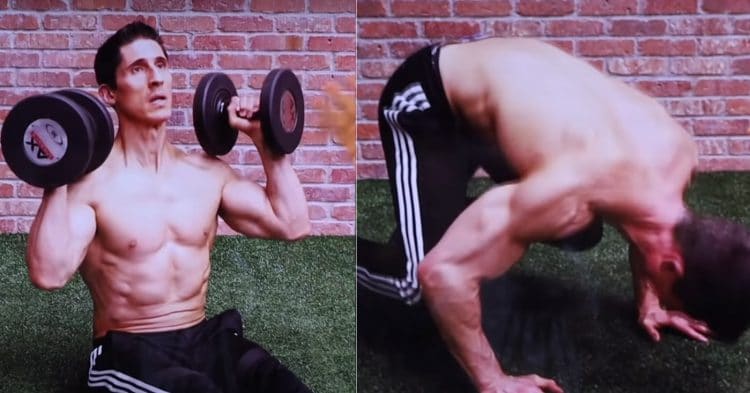 Jeff Cavaliere M.S.P.T, CSCS (Athlean-X YouTube channel) is one of the leading fitness experts in the industry and if you’re looking for new training ideas that work, you’ll never go wrong taking his advice. Cavaliere recently uploaded a new video on his channel where he shared what he believes to be the “8 best shoulder exercises for mass” that you can do at home.

So if you prefer to avoid fitness centers for whatever reason and especially due to the current health situation, then you’re in luck!

For some of these exercises, all you need is your own body weight, but if you have dumbbells, then that just means you’ll have a few more options. However, you should never think that a lack of training equipment means you can’t get a good workout because there are lots of options.

The bodyweight side lateral might be an underrated exercise but it provides the same benefits as a lateral raise or any exercise that works the middle delts.

Cavaliere explained that the key to this exercise is focusing on driving the elbow into the ground to facilitate the abduction of the arm. If you simply rotate your body, you will not benefit from this exercise. He used the term “relative abduction” to explain that whether you do a lateral raise or this exercise, there’s no difference and you’ll get the same benefits.

This exercise combo is incredible for working the middle delts but you’ll need dumbbells to do it. More specifically, a heavy and a light dumbbell because you’ll do cheat reps with the heavy dumbbell and strict reps with the lighter dumbbell.

Cavaliere explained that the advantage of cheating the weight up is that it allows you to better overload the eccentric (negative) portion of the exercise which is very important for hypertrophy. Then you want to drop that weight and grab the lighter dumbbell to continue the set by doing strict reps until you reach failure or beyond.

The prowler push-up offers everything that you’d want in a bodyweight shoulder exercise. It allows you to maximize the concentric and eccentric component of each repetition, while really challenging the front delts and minimizing the involvement of the chest.

“This variation gives us the chance to place a good eccentric stretch and overload on the shoulders, and it gives us a concentric opportunity as well because we have to push our bodyweight back.”

Do one rep of a standing or seated overhead press with a challenging weight and then try to do it seated on your butt with your legs extended, using the same weight. See how much of a difference having your feet planted on the floor makes?

The “Z” press takes the legs out of the movement which increases the difficulty of the exercise significantly, by really forcing the shoulders to do all of the work. You’ll most likely need to use lighter dumbbells but it will be to your benefit.

The advantage of the frog push-up over the pike push-up is that the former is performed as more of a vertical press, whereas the latter is done as more of an angled press. The frog push-up maximizes the potential for resistance because it requires you to push directly against gravitational forces.

This is done by shifting all of the weight forward onto the front delts and keeping the knees close to the elbows.

The dumbbell high pull gets a thumbs up from Cavaliere because when performing the exercise, the hands are always higher than the elbows which prevents internal rotation of the arms. On the other hand, an exercise such as the upright row, for example, would result in the opposite of which he mentioned in the video.

Handstand push-up (All heads of the delts)

If this variation is too hard for you, Cavaliere suggests moving your hands away from the wall which decreases the amount of overall weight that you’re having to push against.

This exercise is the opposite of the “Z” press because now you want to use your legs to help you power up more weight in an effort to create more overload on the target muscles. Cavaliere explained that you want to get extension through the ankles, knees, and hips to get the weight up, and then, of course, you’ll take advantage of this to help press the dumbbells overhead.

Use a challenging weight but don’t go too heavy to where you have trouble pressing the dumbbells overhead during your sets.

Now you have no excuses to skip out on shoulder training at home due to a lack of equipment. We’ve progressed so much over the years and the different exercise options using little to no equipment are truly incredible.

Make sure to watch the 6-minute video below which won’t take much time out of your day, plus you’ll have some great ideas for your next shoulder session.

It can be tempting to skip your workouts when you are short on time. That’s especially true for smaller muscle...

If you want to build massive, powerful shoulders, you need to include some kind of overhead press in your workouts....

Push Jerk, Push Press, and Strict Press – What’s the Difference, and Which One Should You Do?

Bodybuilders have a saying: If you want to grow, you gotta row. Rows are crucial for building a bigger, stronger...

How much weight do you military press? What about dumbbell side lateral raises? Let’s not forget barbell shrugs loaded with...