Celebrating Bodybuilders With The Most Unreal Pecs

An important part of being a successful bodybuilder is having a well-defined chest. However, there are some who go above and beyond with their pectorals, and those are who we are taking a look at today.

Pecs can be one of the trickiest muscles to properly build. However, they are often a make or break muscle group, when it comes to bodybuilding. Although in today’s age of bodybuilders, there is less of an emphasis on the chest, largely due to a lack of the use of free weights.

There are some people who, like with any muscle group, are more gifted with their pecs. These athletes show definition and hardness that others are not able to achieve, no matter how hard they train. Today, we take a look at these such bodybuilders.

This is the Top 10 Bodybuilders With The Best Pectorals.

Gary Strydom was a high level bodybuilder in the 1980’s, who competed at the Olympia a handful of times. This South African athlete was the only person to win a championship under Vince McMahon’s World Bodybuilding Federation. Subsequently, he made a name for himself, competing in the European circuits.

What makes Strydom’s pecs so impressive is not their size. In fact, he has some of the smallest on our list. However, he had a level of definition which is unmatched by his fellow bodybuilders. Moreover, they were unbelievably striated, in a way that was unrivaled for his time.

A beast of a man, Markus Ruhl is a German bodybuilder, who made his rounds in the early 2000’s. While he never reached the highest levels of success, he was always consistent. Winning two IFBB shows in his time, he scored as high as fifth in the Mr. Olympia.

Measuring as big as 60in, Ruhl’s pectorals could end up on this list with their size alone. On top of that though, in his prime they were super defined. His chest was ultra toned, to the point that it stood out among his peers for its size and shape.

Nicknamed the “Black Panther,” Serge Nubret had a massively successful bodybuilding career in the 60’s and 70’s. Known for having one of the most perfectly sculpted physiques, he was able to use this to earn him multiple championships. Many even joked that his body looked like it was crafted by the gods, because of it’s symmetry and definition.

One of Nubret’s most defining features was his pecs. Not necessarily because of their size, but instead due to their shape. While he did not have the most thick chest, it was rounded in a way that was enough to make his counterparts jealous.

One of the most underrated bodybuilders of all time, Roy Callender largely had his success in the late 1970’s and 1980’s. In between stints of pro wrestling, Callender set the bar when it came to chest poses, which helped him score as high as 3rd in the Olympia, and earn a spot in the IFBB Hall of Fame.

Callender’s pecs were a sight to behold, with jaw-dropping definition and rounded bottoms. However it was his gigantic rib cage that tied it all together, making his side chest pose unstoppable. This came as a result of his high-rep training methods.

Franco Columbu is one of the most legendary bodybuilders of all time. He changed the game, when it comes to athletes of shorter statures. Standing at just 5’5, he was deceptively strong, allowing him to win multiple championships over the years.

Despite his short height, Columbu’s pecs were absolutely massive. Not only were they thick and bulky, but large all the way around. He had a broad chest, with good definition, making him a surefire entry on our list.

Lee Haney is one of the most successful bodybuilders of all time, winning 8 Mr. Olympia titles. In the 1980’s, he was the most feared bodybuilder, due to his imposing size. Any time a competitor saw that Haney was competing, they knew they would have their hands full.

Although Haney was known for his overall size, his pectorals in particular were massive. They were striated and nicely shaped, as well as being thick and hard. When he would strike a front lat spread pose, there was no denying that he had the best chest in the game, at the time.

The only other person to score 8 wins at the Olympia, Ronnie Coleman is largely considered to be the greatest bodybuilder of all time. A true mass monster, Coleman always brought a top tier package to the stage. As a result, he wound up with the most IFBB Pro wins, at 26.

Every time Coleman took to the stage, his sheer size was what made the first impression. However, when you get past that, it is clear that his pecs are one of the most defined features of his physique. In his prime, Coleman had the best chest in the game, as a result of his tendency to lift as heavy as he could. This led to their thick, rounded shape.

Lou Ferrigno is clearly known best for his role as the Incredible Hulk in the classic tv show. Although that should not take away from his incredible bodybuilding accomplishments. The reason he even landed that role, was due to his imposing size, which helped him win multiple titles over the years.

Due to his role on this show, fans got to take a weekly look at Ferrigno’s massive pectorals. Having perhaps the biggest size on this list, Lou is a unique case when it comes to his chest. Their square shape, and pure bulk was a goal for many aspiring bodybuilders who looked up to him in those days.

Certainly the most evil person on this list, Bertil Fox is currently serving a life sentence for committing a double murder. Nevertheless, this does not take away from the fact that he is one of the best bodybuilders of his era. Scoring as high as fifth in the Olympia, his career was cut short by his heinous actions.

What stood out the most about Fox’s physique, was his unbelievably thick pecs. By far the meatiest on our list, he built his chest using high rep, heavy weight, workouts with simple movements. In addition to their size, they were also well shaped and nicely defined.

Who else could top our list, but the godfather of bodybuilding himself, Arnold Schwarzenegger. By far the most popular bodybuilder in history, Arnold reached the highest levels of the sport during the 1970’s winning the Olympia seven times.

Besides his massive size and charismatic personality, Arnold had much of his success due to his mind-boggling pectorals.

Not only were they ultra thick, and hard, but they were perfectly proportional for his frame. When he struck his classic pose, he would almost instantly knock the rest of his competition out of the park, just from the size of his chest.

These were the bodybuilders that we thought had the best pectorals throughout history. What do you think of our list? Is there someone that you think we missed? 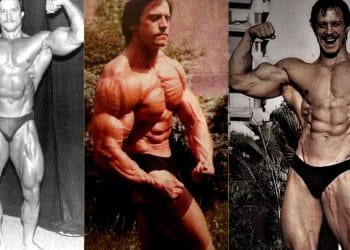