2020 Mr. Olympia Big Ramy, and Classic Physique Olympia champ Chris Bumstead were seen after the event going head to head in a pose down 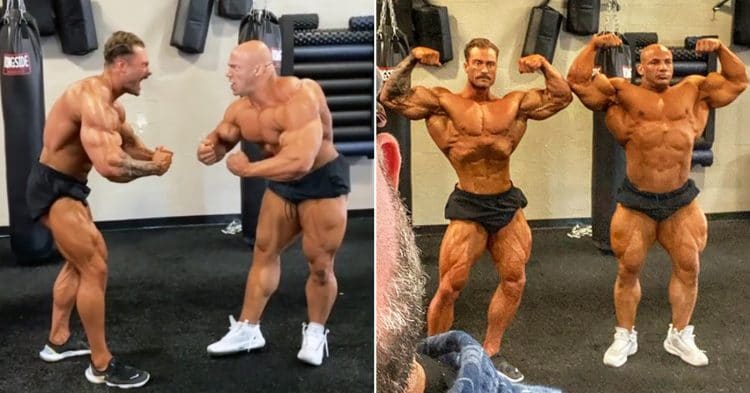 The 2020 Mr. Olympia saw a few people leave Orlando, Florida victorious after competing from December 17-20th. Two of the biggest winners from the weekend, Big Ramy and Chris Bumstead, did a photoshoot after the event that saw them go toe-to-toe on some poses in what turned out to be a really neat visual.

There can be no denying that Ramy was the biggest winner after the Olympia Weekend took place. After getting a special invitation to compete, he looked better than ever on stage, earning the honors of being the sixteenth man named Mr. Olympia. Followed just behind him however, at least in terms of vindicating wins over the weekend, was two-time Classic Physique champ Chris Bumstead. The Canadian proved himself to be the best athlete in the division, after having a closely contested win in 2019, leaving no doubts about his place as the top dog.

With how impressively these two performed, Big Ramy and Chris Bumstead have a lot of attention on them in the wake of the contest. Following the Olympia, the two appeared together for a photoshoot, and thus an opportunity presented itself. As seen in this post to Instagram, these two champions went head-to-head in a most muscular pose-off.

It was such a crazy visual to see both of these elite, but very different bodybuilders squaring off like this. The most muscular pose is one that obviously favors the mass monster Ramy, but Chris held his own against Mr. Olympia. That being said, both men could hardly contain their smiles as they did this posing.

It was not just the most muscular that they were seen doing. A subsequent post saw Ramy and Bumstead doing a front double bicep, and while this shot was from farther away, it was cool to see. Chris even added his trademark vacuum pose to the equation, making the difference between the two even more interesting to see.

Seeing Big Ramy and Chris Bumstead standing next to each other and posing like that, it is a perfect representation of why there is a difference between Men’s Open and Classic Physique. As incredible as Chris looks, and there are even some aspects of his physique that are better, he is nothing compared to the sheer size of the Egyptian champion.  Nevertheless, it was a really cool experience to watch these two champions sharing this posing even if it was just for a moment.