Following the end of the 2020 Mr. Olympia, we look back at the top 5 Open competitors, and reflect on how Big Ramy wound up on top 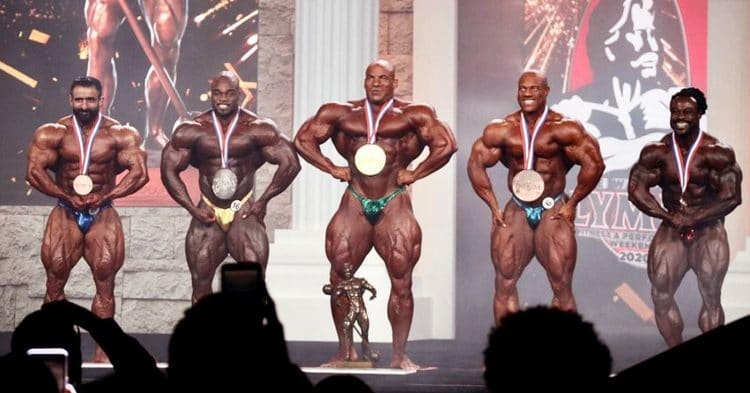 The 2020 Mr. Olympia is in the books, and Big Ramy is your new Olympia champion. Following the contest, we take a look back through the weekend and determine exactly how we got to this point.

This year’s Olympia went down December 17-20th, in Orlando, Florida, and for the most part, Ramy took the stage by storm this year. He has always had one of the crazier physiques, but with him catching COVID-19 a couple of months out of the show, and needing a special invitation, the thought was that he would not be at his potential.

Nevertheless, he took the stage in the best shape of his life and beat out seven-time Olympia winner Phil Heath, as well as 2019 champ Brandon Curry. It was an insane sight to behold. These were the top 5 results from the contest:

So how did we get to the point where Ramy took first place, and conquered the rest of the athletes on stage? Today we take a look at the performances of each of the top five from the 2020 Mr. Olympia, and assess exactly went down in Florida.

All things considered, William Bonac actually looked pretty solid throughout the entire Olympia Weekend. He showed the same level of insane conditioning that he used to win the 2020 Arnold Classic, and even improved in most of the areas that he needed to work on. All things considered, it was a pretty complete package that he brought to the stage.

Unfortunately Bonac fell victim to the problem of being undersized compared to the majority of the rest of the top 5. Even during the prejudging on Friday, it was clear that the judges were trying to decided who would get fourth and fifth between he and Hadi Choopan.

In the end, William’s physique was not quite at the same level as Hadi, but he was still complete enough to earn a respectable fifth place score.

Coming in fourth place at this year’s Olympia was the 2019 People’s Champ Hadi Choopan. During Friday night’s prejudging, he looked pretty good on stage, but did not seem to get the attention many thought that he deserved for how good and conditioned his physique was.

This would change during the finals though, as he was being pitted against the rest of the guys, and really had the chance to show off his definition and always impressive package.

Surprisingly the conversation after the Olympia was not so much that Hadi got fourth, as it was that some people felt he was cheated out of a third place score.

A lot of spectators felt that pose-for-pose, Hadi looked better than Phil Heath in a variety of ways, and deserved to score accordingly. Nick’s Strength and Power also make a solid case that Choopan should have had a repeat of his third place from the 2019 Olympia.

Check out the video

Heading into this year’s Olympia, all the talk was about Phil Heath, and how he would look in his return against 2019 champ Brandon Curry, and the rest of the competitors. In the end, the answer to these questions was that Phil looked good overall, but not great. As always, his back was the best on the stage, and he spent a lot of time in the center stage position, being judged against everyone else.

However Heath seemed to be lacking in some areas, notably with his questionable conditioning. Another point of concern was his midsection, which cost him an eighth Mr. Olympia title in 2018, but that fans were hoping to see improved.

That being said, Phil seemed to spend a lot of time on stage trying to cover his midsection, which still looked a bit bloated compared to the other athletes. While he had more control of it than the last time we saw him the aforementioned lack of conditioning left him relaxing more as the callouts went on, fully exposing that things were still less than ideal in his core.

Ultimately he would score third, which is beyond respectable when considering how long he has been away, but even that was debatable when he was compared to people like Hadi Choopan.

Like previously stated, there was a lot of attention on Brandon Curry, to see how he would look against a returning Phil Heath.

When he took the stage, he looked very good all the way around, having made some substantial improvements since his 2019 Olympia winning package. On stage he was one of the hardest bodybuilders, with his conditioning being through the roof, and his physique being fairly complete.

If you want to look at what cost him a second Olympia, there is not a lot to complain about. Being critical, one could point out that his calves were a little small compared to everyone else, and his back could not hold up to Phil’s or Big Ramy’s. That being said, it seemed that a big part of what left him in second place by the end of the weekend was not something he was missing, as much as it was how Big Ramy looked.

If the Egyptian hadn’t gotten a special invitation to the Olympia, there would have been no questions that Brandon was overall the best competitor on stage. Unfortunately for Brandon that was not the case, and he ended the contest in second.

At last, we get to the new Mr. Olympia, the sixteenth man to hold that distinction, Big Ramy. The road to the 2020 Mr. Olympia was paved with many difficulties for the Egyptian mass monster, from catching coronavirus, to needing a special invite to compete. However he promised that this year would be the best he had ever looked, at that was exactly what we got.

Ramy is the guy at bodybuilding shows that either looks unstoppable, or is just missing the mark. It was the former this year, as he brought the best conditioning and physique that we have ever seen from him. During the prejudging, it was clear that he was on another level from everybody on several of the poses, and this only continued in the finals.

His legs looked inhuman, and his back was not far off from Phil’s, making him a serious threat to everyone on stage. In the end, his package this year was so sharp that it blew the doors off of the competition, and earned him both the title of 2020 Mr. Olympia, and the People’s Champ.

What did you think of the 2020 Mr. Olympia? Did the judges get everything right, or is there someone who should have scored higher?