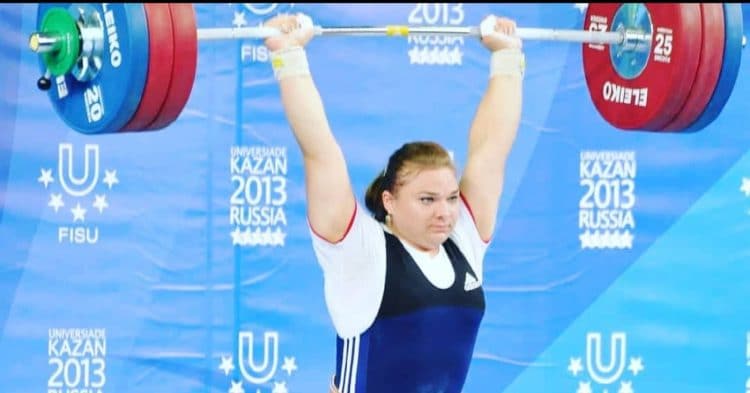 Tatiana Kashirina is a five-time gold medalist and World Champion for the International Weightlifting Federation who has just been found to be in violation of anti-doping rules for the second time. The 29-year-old weightlifter won gold at the World’s in 2010, 2013, 2014, 2015, and 2018, and is also an eight-time European champ in the +90 kg, +75 kg weight class prior to 2018. Tatiana Kashirina was the favorite for Gold for the 2021 Tokyo Games.

This week, Russian news agency TASS is reporting that Kashirina has been temporarily suspended due to an anti-doping rule violation. This offense comes after the World Anti-Doping Agency (WADA) conducted an investigation of Russian athletes, and received results from the Moscow Laboratory of doping tests between the years 2012 and 2015.

The investigation included information from a whistleblower that sent the WADA a copy of the Moscow Lab’s Information Management System (LIMS). Following that, six Russian athletes were found in violation as of October 2020.

The LIMS contains the scientific information needed to analyze human test results. It was holding the names of six Russian athletes that were also found in violation of the same policy. In 2017, WADA received information of the athletes who had committed the violations from 2011 to 2015.

This is the time frame that Tatiana Kashirina is suspected to have been in violation of the anti-doping policy.

Related: The 10 Strongest Women To Ever Walk The Earth

This is her second offense, after Kashirina served a two-year sentence from 2006 to 2008 for violating similar anti-doping rules. This suspension will prevent her from entering the qualification period for the 2021 Games, which will end in April 2021.

Even if she had qualified for the 2021 Games, Kashirina would have been required to compete as a neutral agent, without the Russian flag. Russia has been barred from international competitions, including the Olympics, until 2022.

Kashirina currently holds the snatch record at two attempts with 152 kg and 155 kg for her second attempt. Her clean and jerk record was set on the second attempt.

This second violation could result in an eight-year suspension for the decorated athlete.  A second sanction that leads into her thirties could be a devastating blow to her career.

There have been a whirlwind of reports coming out of the weightlifting world, regarding investigations on Russian athletes for Doping...

It would appear that Russia will be unable to compete at the 2020 Tokyo Olympics. This comes as a result...