Big Ramy Promises To Be Peeled At 2020 Olympia, Looks Crazy In Recent Updates

Ahead of the 2020 Mr. Olympia, Big Ramy shows impressive conditioning and promises to be peeled this year 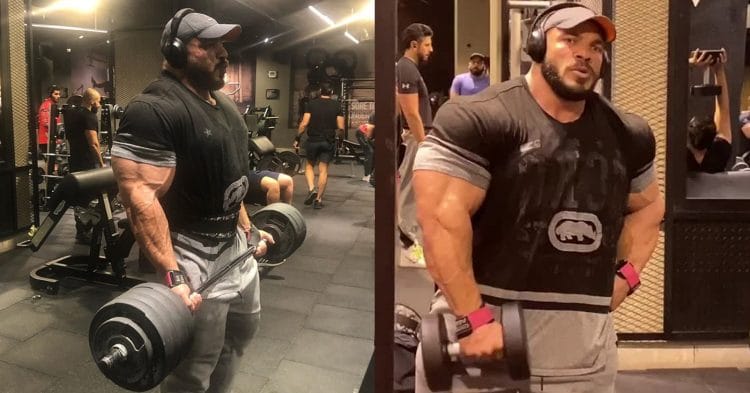 Some were critical of the fact that Big Ramy was granted a special invitation for the 2020 Mr. Olympia. Yet some recent updates show him looking like a legitimate threat to the title.

It is always tricky when trying to grade Ramy and his physique leading into contests. He will often look stellar in updates on Instagram, but then lacks that same awe-inspiring physique on stage. This is something that kind of infuriates fans, simply because they know he has the potential to be so much better than he sees.

Although Big Ramy got a special invitation to the Olympia on just a few weeks notice, he is determined to be at his best when he competes. He has been sharing some updates over the last few weeks that show how hard he is working. The most recent one that he posted to Instagram saw him training his arms, and he looks absolutely shredded from what we can see of him.

Ramy is promising to come peeled to the 2020 Mr. Olympia, and it seems that he is prepared to do just that. History tells us that he sometimes lacks in the conditioning when it comes time for him to step on the stage. The best that we have seen him look is in 2017, where he was runner-up to Phil Heath at the Olympia. However if you look at his arms here, he is ultra vascular and honestly looks better than he has in a long time. It appears that he is returning to prime form.

Of course, Ramy is a mass monster who always brings a huge physique to the stage. Even when he was scoring third place at the Arnold Classic earlier this year, he was still the biggest on stage. So with the conditioning seeming to catch up, he is set to take the Olympia by storm this year.

Now to be clear, there is still a lot of questions regarding the rest of the physique of Ramy. We had seen a physique update from him at five weeks out, but at least in terms of his arms he seems to be in even better shape than he was then. This is clearly a product of the hard work he has been doing, which he has been sharing to his Instagram.

When it comes to how Big Ramy will look when he takes the stage next month, time will tell if the way he looks now will translate properly. As previously stated, he has a tendency to look great in the lead-up to events only to not be able to keep that same energy on the big stage. With how short this Olympia prep is, compared to other years, one can hope that he can still get enough prep.

Breaking Bench: What You Need to Know About the Bench Press