Mr. Olympia is returning to stage with every intention of hoisting the Sandow trophy again! 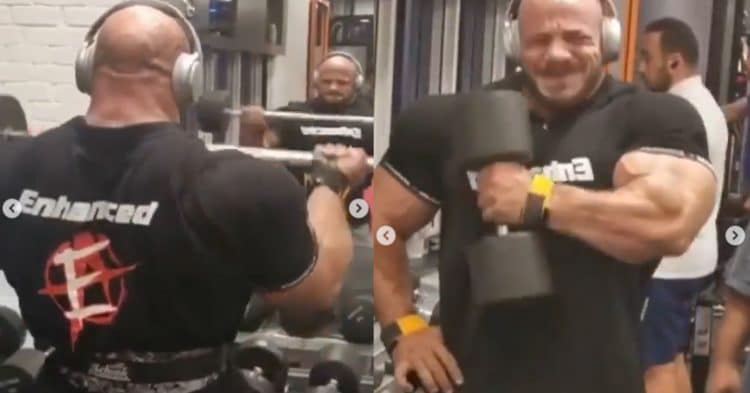 2020 Mr. Olympia champion Big Ramy looked like something from a different planet in a recent training session. He’s, of course, one of the biggest, if not the biggest man on a stage full of monsters.

After placing 2nd to 7x Mr. Olympia champion Phil Heath in 2017, Ramy settled for a very disappointing 6th in 2018. He decided to not compete at the 2019 Olympia and it was exactly what he needed to be able to come back and win the biggest title in bodybuilding the next year.

The Egyptian bodybuilder has been criticized for carrying too much mass which has affected his conditioning and having legs too big in comparison to the rest of his physique. Well, it seems he really made the necessary adjustments, and the goal now with the Olympia in October, is to get even better.

Related: Big Ramy Vows To Give Fans ‘The Best’ Package Possible At 2021 Mr. Olympia: ‘We Need To Be Better’

Check out those insane guns!

Ever since Big Ramy started climbing the Open division ladder, many have said that if he could nail his physique, no one can beat him. Well, it’s hard to argue with that.

At the 2020 Olympia, he defeated the defending Olympia champ Brandon Curry and Phil Heath and it was a sight to see him stand above the rest.

While he certainly has what it takes to do it again, the competition will not take it likely.  You have guys like Brandon Curry, William Bonac, and Hadi Choopan who can give anyone a run for their money, not to mention the other top competitors, and it’s going to be an exciting event this year.