The up and coming Irish bodybuilder shows his phenomenal physique progress coached by Neil Hill. 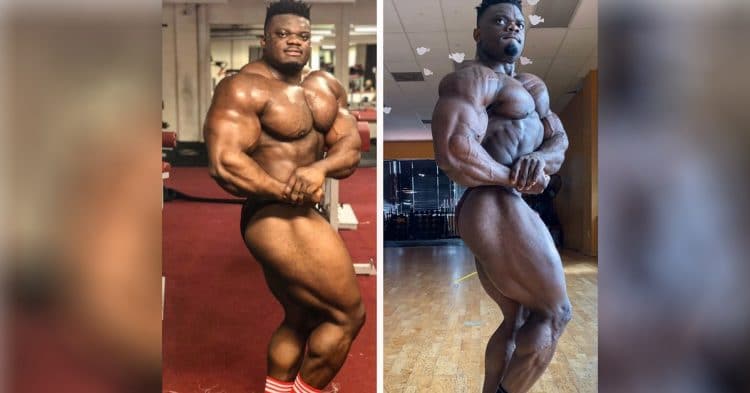 Blessing ‘Boogieman’ Awodibu is quite the character which you’d know if you’re familiar with his antics but he’s also one heck of a specimen which becomes quite evident at first glance of the freaky Irish bodybuilder. Awodibu is a 2x Arnold champ, and 4x overall IFBB champion who is becoming increasingly more popular with 1.5 million followers.

But he’s currently preparing for the upcoming Arnold Classic Australia on March 21 and he has been looking insane just weeks out from the competition, recently posting an arm workout where you could see he that he’s taking 2020 seriously and his coach Neil Hill is definitely going to make sure of that.

In fact, Awodibu’s most recent Instagram post was a transformation comparison from July 2nd of last year to March 3, 2020, and he has obviously made some huge progress with the help of coach Neil Hill who’s a well-known trainer to the Pros, one of which was William Bonac, although that ended up not turning out so great.

But here’s the transformation photo…

“Transformation Tuesday with the one and only coach @neil_yoda_hill1 July 2nd – March 3rd . #dedication #hardwork #consistency #higheststateofreadiness @redcon1
Would yall like to see the transformation video?“

Blessing also wrote in the comments… “By the end of 2020 imma be everyone’s favorite bodybuilder 😁“.

Well, he’s definitely a favorite among many fans and he has crazy potential which is quite apparent. And if he keeps improving then his future will be even brighter.

Awodibu is known for having a sense of humor and fun personality which will only help his success hence the vine compilations. He even posed with his shirt off in a store one time which was pretty funny too. And it’s ironic because he takes inspiration from Kai Greene who also has a big personality.

But he definitely has high expectations and hopefully, he continues on with his awesome progress so that we can see him doing big things in the near future.

Here’s another photo of him 4 weeks out…

Open Bodybuilding has taken over Las Vegas days before the competitors battle on the 2022 Mr. Olympia stage. At Thursday's...

Peak week has officially begun and bodybuilders are wrapping up the final stages of preparation for the 2022 Mr. Olympia...