Pro Strongman competitor Bobby Thompson claimed space in the American record books with an insane performance at Clash on The Coast. 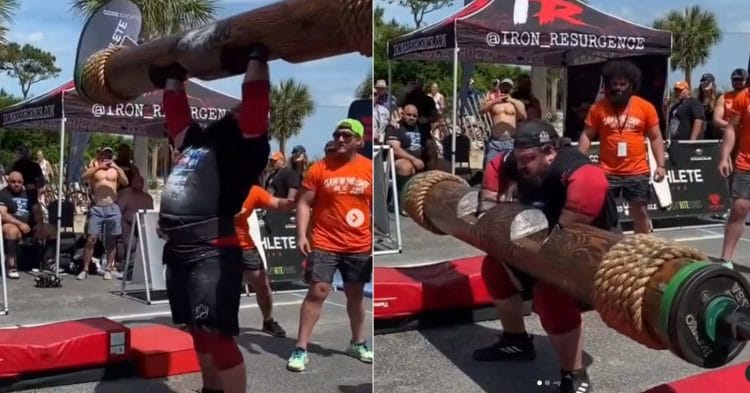 Well-known Strongman athlete Bobby Thompson crushed the American log press record on Friday, April, 30, 21 with a 217.5 kg/478.5 lb lift. He achieved the feat at Anthony Fuhrman’s Clash on The Coast that runs from April 30-May 2 at Hilton Head Island, South Carolina, and can be watched on Core Sports. The competition saw 105 kg competitors pitted against each other in an event sanctioned by World’s Ultimate Strongman. Although, Open men’s Strongman athletes could also participate for the record.

As you can see in the clip that Thompson shared to Instagram, he had to really fight through to complete the lift but prevailed victoriously and embraced fellow Strongman Rob Kearney who judged the lift and actually held the log lift record previously.

“So happy for you man, honored to have judged it,” Kearney wrote in the comments of the post.

Watch the record performance below…

It was an extremely proud and humbling moment for Bobby Thompson who shared an inspirational message in his post that we included below.

“As you ascend to elite level in any sport the number of those around you will sky rocket, but the numbers of those who know you will be limited to who was there before you were anyone to be known in the first place , today I did something unique, something i was told I couldn’t do with a torn bicep never repaired, something that just wasn’t going to happen. But..I did it , I did it around my family, not just my blood but the kind of family who knows just how insane you have to be to live for these feats….

My name is Bobby Thompson The American nightmare And I have the strongest shoulders in America.

P.S Thanks Rob for everything. @worlds_strongest_gay”

So what’s next for the big man? Bobby Thompson is scheduled to compete at the 2021 World’s Strongest Man competition with the best of the best Strongman athletes in the world.

The event will go down from June 15th-20th, in Sacramento, California this year. In 2020, the competition took place in Bradenton, Florida with no fans allowed to attend because of the coronavirus.

Thompson also competed last year but failed to advance to the finals. But this year, he’ll also have his hands full with elite competitors like defending champ Oleksii Novikov, 4x winner Brian Shaw, and many more. So far 25 are planned to compete but this is subject to change.

It’s going to be an epic event and we’ll be sure to keep you updated leading as we get closer.

How to Correct Muscle Imbalances – The Ultimate Guide