It has been 14 weeks since Patrick Moore's Achilles tendon surgery, and he is "almost back to 100%". 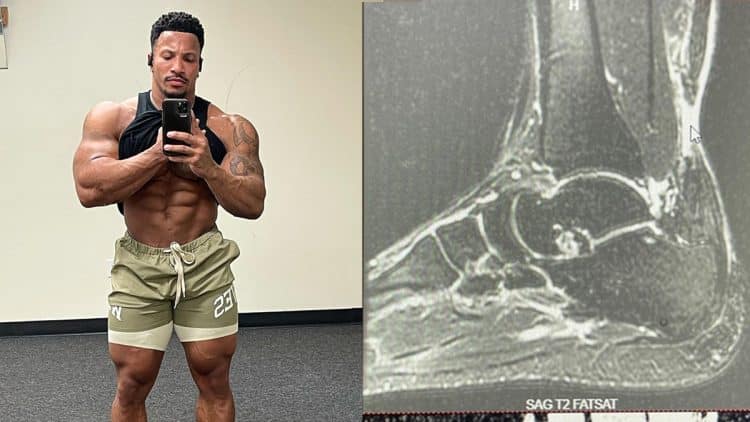 Two-time Mr. Olympia participant Patrick Moore suffered an Achilles tendon injury in April that has forced him on the sidelines. Moore’s social media presence had significantly diminished over the last few months. This had given rise to speculations about his potential retirement or an extended break from the sport. He finished 10th at the 2019 Olympia and held 14th place overall at the 2021 Olympia.   He’s got an incredibly aesthetic build that demonstrates his focus on aesthetics over a size.

Moore last competed at the 2021 Legion Sports Fest Pro and finished tenth. Following this, he decided to take time off and announced that he would not be competing until 2023. Later that year, Moore hinted at a move down to the Classic Physique division owing to his emphasis on aesthetics over a size. However, his lack of social media activity gave rise to speculation about his possible retirement.

In an attempt to put an end to these speculations once and for all, Patrick Moore recently posted a lengthy Instagram message explaining the injury to the Achilles tendon. The IFBB Pro bodybuilder admitted that his first reaction to the injury was that of shock. However, he managed to get past it and made full recovery.

In an Instagram post shared on August 19th, Patrick Moore stated that he completely ruptured the Achilles tendon in his leg and had to undergo surgery on May 10th, 2022. Moore also revealed that it was the first major injury of his bodybuilding career. Therefore it was a lot more difficult for him to deal with it.

Patrick Moore shares the details of his injury

A bodybuilder admitted to having doubts about his ability to compete in the future. However, 14 weeks after the surgery, Moore has made a complete recovery and he is looking forward to a 2023 comeback with a positive attitude.

“4/28/22 I Completely ruptured my Achilles. I’ll never forget the exact feeling I had when I was told it was ruptured. I can remember struggling to hold back tears as it was the first time I’ve ever suffered an injury….a severe one at that.

My first thought “My career is over and I hadn’t even reached my peak!”

It took a few days to even get past the initial shock of what had happened. I was so used to being the guy who could do any and everything I wanted, and now I couldn’t even walk. Mentally was one of the hardest few weeks I’ve ever had….the feeling of never being able to do what I loved again.

I didn’t talk or post about it because I didn’t need or want the attention or anything to distract me from getting back healthy. On 5/10/22 I had surgery by Dr. Michael Greaser. Now 14 weeks post op, it is such an amazing feeling to be almost back to 100%. The fact is unexpected storms will always come, but eventually they’ll pass and you just have to make sure that you’re ready! You owe it to yourself to get back on track if you get knocked off!” Patrick Moore wrote in the caption to his post.

Moore’s time away from the sport and his injury appears to have taught him a great deal about life as a whole. The experience he has under his belt and the knowledge that he can overcome big obstacles along the way will allow him to take his career to the next level when he returns to the stage in 2023.