Michal Krizo intends to earn his pro card at the 2022 Amateur Olympia Italy contest and then punch his ticket to Olympia with a victory at the Prague Pro in late October. 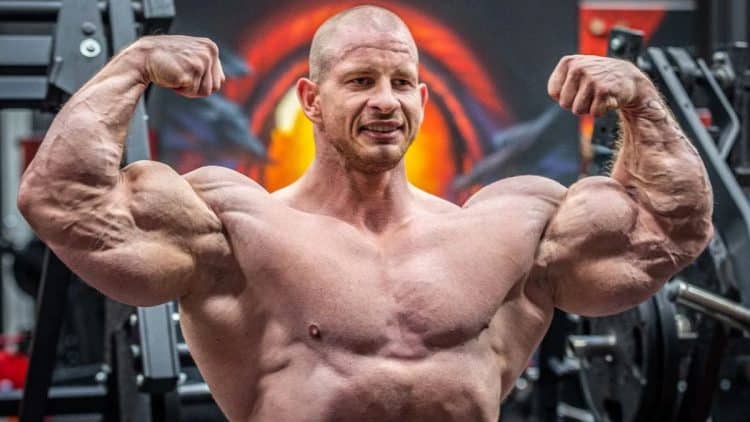 Open class competitor Michal Krizo has announced his ambitious plans for this year’s season of bodybuilding. Krizo intends to earn his pro card at the 2022 Amateur Olympia Italy contest in October before attempting the Prague Pro later that month, according to a statement given by Nick’s Strength and Power via YouTube.

Michal Krizo made a strong impression on the bodybuilding community after recently switching from the IFBB Elite Pro League to the NPC (National Physique Committee). Lauded for his astounding upper body and overall mass, Krizo has an imposing build, which has many fans and legends alike clamoring to see him compete on some of bodybuilding’s most prominent stages.

Kicking off his 2022 Mr. Olympia campaign, Krizo traveled to North America and visited some of the sport’s popular training facilities. He posed and trained in the company of respected bodybuilding coach Milos Sarcev at the famous Dragon’s Lair Gym in Las Vegas, Nevada. Like many others who have seen Krizo in person, Sarcev believes the Slovakian native is the real deal and said pictures have yet to do the rising prospect justice.

His next stop saw him visit four-time Mr. Olympia Jay Cutler. The bodybuilding legend was left with a powerful first impression. Cutler sees Krizo as a legitimate threat to any Open bodybuilder after complimenting his size and width.

Moreover, in Cutler’s summation, Krizo has striations and fibers that remind him of his successor, bodybuilding legend Phil Heath. Even though Krizo seemingly has all of the tools to disrupt order in the Men’s Open division, first, he must earn his pro card.

Krizo’s path to Mr. Olympia starts by earning his pro card at the 2022 Amateur Olympia contest in October and then trying his luck at the EVLS Prague Pro Olympia qualifier later that month, according to Nick’s Strength and Power YouTube channel.

The rising star hasn’t been shy about showing off his training progress. In preparation for his next show, Michal shared a promising physique update last week. Despite being several weeks out from competing, Krizo looked shredded and sitting at 293 pounds.

Many veterans of the sport see a bright future for Krizo in the IFBB Pro League. Samir Bannout, a former Mr. Olympia winner, suggested that Krizo has a better v-taper and bigger arms than top five 2021 Olympia finisher Nick Walker. However, tension existed between the two before Krizo’s recent switch to the NPC. After “The Mutant” won the 2021 Arnold Classic title last year, Krizo said he didn’t see the 28-year-old as one of his rivals due to his lack of symmetry.

In addition to Cutler and Bannout, bodybuilding veteran Lee Priest also gave his thoughts on Krizo’s ‘freaky’ physique. While Priest agrees that Krizo will crack the top 10 at Mr. Olympia, he prefers the look of Walker, who has dedicated his efforts solely to preparing for his second Olympia contest later this year.

Reigning two-time Mr. Olympia Mamdouh ‘Big Ramy’ Elssbiay revealed a 337-pound physique update recently. Given Krizo’s size and balanced proportions, many believe he will be a legitimate threat against other IFBB Pros, like Ramy, as soon as he earns a pro card.

Another bodybuilder with similar aspirations to Michal Krizo is ‘Good Vito’ Vitaliy Ugolnikov. Last year, Vito also made the switch to the NPC from the IFBB Elite Pro League. He is currently tipping the scales at 275 pounds and moved to Brazil recently to further his career. While he’s sure to have an impact on his new league, it’s unclear when ‘Good Vito’ plans to earn his IFBB Pro card.

With preparations underway, Krizo is now less than seven and a half weeks out from his first NPC bodybuilding show. Should Michal Krizo earn his IFBB Pro card in October, the bodybuilder intends to win the Prague Pro that same month to guarantee passage to the 2022 Mr. Olympia contest.