Brandon Curry, William Bonac, Patrick Moore, And Others Share Updates On Their Training And Physiques 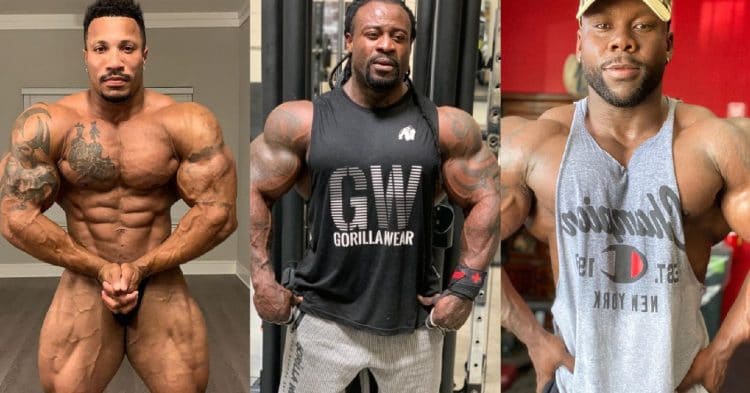 It has been a slow time in the world of bodybuilding right now. However as things begin to pick up in the sport, various bodybuilders have given physique updates, and they are all looking unstoppable.

As the winner of the 2019 Mr. Olympia, all eyes are on Brandon Curry. Although he has been a bit quiet on his social media, a picture was recently uploaded that shows how his physique is coming along during the off-season. Judging by the way he looks, it seems safe to say that he is not slacking off.

Obviously this is far from peak Brandon Curry, but as one of the best Bodybuilders in the world he is always in incredible shape. Seeing his massive chest and well defined legs is a nice reminder of the beast that we saw take the stage last year.

As one of the best up and coming bodybuilders right now, Patrick Moore has the attention of fans worldwide. He has seen criticisms of being a little undersized for the Open division, but has not let that away him. As he has shown with some recent posts to his Instagram, he has been hard at work to pack on some size.

However it is more than just the chest and arms that have been getting work. Moore has also been working his core and his legs a ton too, making sure he keeps a balance in his physique. He made this clear as well, by sharing other impressive looking pictures of his progress.

Any time he takes to the stage, William Bonac is always a threat. His skills are highly regarded amongst bodybuilders, and he is always bringing the type of package to the stage, that backs this up. As he showed with a picture of him in the down time, he is still keeping busy, even without competing.

Word on the street is that there is a gun show in town, and William Bonac has the tickets. He is not even posing and his arms already look gigantic. It will be exciting to see how he looks closer to time.

When Keone Pearson announced that he was moving from Classic Physique to take on the ranks of the 212 bodybuilders, it came as a surprise. That being said, it made a level of sense, as he had been increasingly getting bigger with age. As he showed recently, this has let him be able to fill out more, as he has bulked up in a healthy way.

It is good to see Pearson adding muscle mass in healthy ways, and keeping his well rounded frame. There is still a long way to go before he will be competition ready, but this update has confirmed what people have been excited about.

Another one of the Classic Physique bodybuilders who are looking to make the move to 212 is George Peterson III. He has already put on display the amount of work he has been doing to make this change possible. However some recent footage has shown how great his progress is coming along, by putting his enormous back on display.

That being said, Peterson made it very clear that he has been leveling up more than just his back. A slew of pictures he posted captured his physique from various angles, and it is quite evident that he is taking the proper steps to make the move to 212 seamless.

Which of these elite bodybuilders are you most looking forward to seeing compete?