You have to see this massive press for yourself! 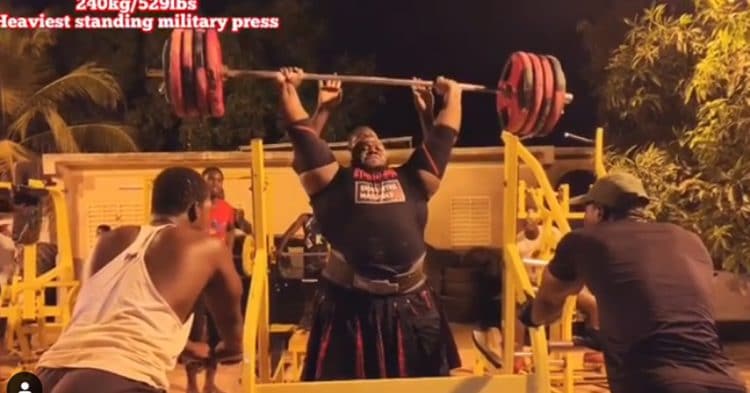 Cheick “Iron Biby” Sanou is known specifically, for being one of the world’s most impressive overhead pressers. And as of this month, he staking his claim as the very best (unofficially, of course). Biby hit a 220kg log press in 2019 as part of Europe’s Strongest Man which came close to Zydrunas Savickas’ 228kg/502.5lb record. Biby was still was able to walk away with the victory in the World Log Lift event though, which he also won in 2018.

But the 28-year-old from Burkina Faso, Africa unofficially broke the all-time log lift record earlier this month by pressing a massive 233.5kg/ 514 lbs. He explained in the post that he accomplished this lift in preparation for this year’s World Log Lift Championship.

But because of the current situation that has put a lot of things on hold, he’ll have to wait until August. But that is if things don’t change before then.

Just a few weeks later, Iron Biby achieves a massive standing military press with 240kg/529lbs off which he writes in the post… “HEAVIEST STANDING MILITARY PRESS.”

That’s an absolutely insane amount of weight to strict press overhead and Iron Biby seemed to do it smoother than most would have thought, Although it definitely wasn’t easy for him. But then to rack it after the press, just shows how ridiculously strong he is.

The best strict press performance in competition from what we found, was a 216 kg/476 lbs axle press (world record) by Strongman legend Eddie Hall at Giants Live in 2017. He even had more in the tank after that press which was mind-blowing.

The axle bar is a lot thicker though compared to the bar Iron Biby used. But that’s probably why he was able to press 529lbs. Not to mention, it wasn’t done in competition. However, it is still extremely impressive and at this rate, we think he’ll get it in competition.

But due to competitions being postponed, it may be a while. Although, it’s possible that Iron Biby posts another insane lift before then.

The 2022 Giants Live Strongman Classic has lost yet another competitor, despite being scheduled to take place in just two...

The military or overhead press is a classic strength training exercise. In fact, as recently as the 1960s, it used...

One of the most competitive strength sports events will go down this summer in Europe. On Thursday, Giants Live revealed...

Records are meant to be broken and this was certainly the case when Cheick "Iron Biby" Sanou crushed it with...