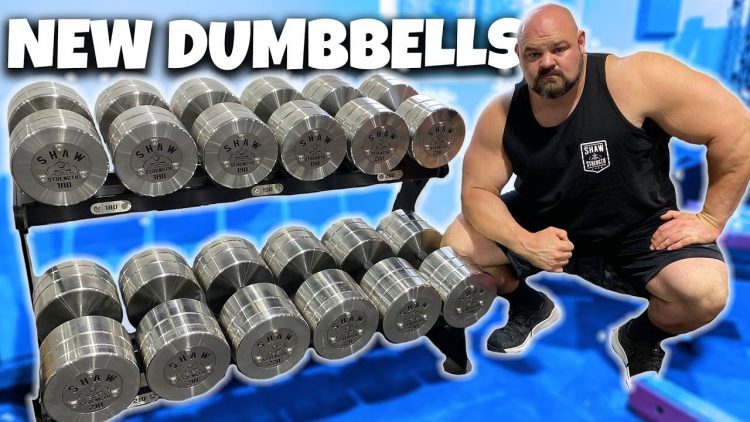 Brian Shaw is strong. I don’t even have a point here, I’m just starting this article off with a factual statement.  As a very strong individual, he needs heavyweights in order to maintain his strength.  Which is why he invested well over 500k of his hard-earned money in his epic garage gym. Now it seems, 500k worth of workout equipment that could equip several gyms, just isn’t enough.

Brian’s latest purchases aren’t just any kind of dumbbells, they are custom made “Shaw strength” branded very heavy-dumbbells. With it, Brian also got a custom made dumbbell rack. The lightest of this monster dumbbell weighs 180lbs and the weights go all the way up to 230lbs.  If…when, Brian takes the 230lbs for a test ride it will probably be one of the heaviest dumbbell presses ever.

If that wasn’t enough, Brian also flexed to the entire internet with some more freshly bought equipment. Both super fancy looking and no doubly super expensive chest press machines. The first one is a standing chest press machine and despite looking like a futuristic video game vehicle, Brian says it gives a great pec stretch.  The other, newly bought, piece of chest day equipment is something called a “converging incline chest press”.  Brian says that even though the equipment is super rare and he was super excited to use it once he bought it, he quickly ran into some problems. When pressing the handles up, he can’t extend his arms fully, due to him being that freakishly huge and lanky. However, in typical Brian Shaw fashion, he says he won’t give up on the machine and he will have it custom made so he could fit inside the fancy chest press with a super long name. 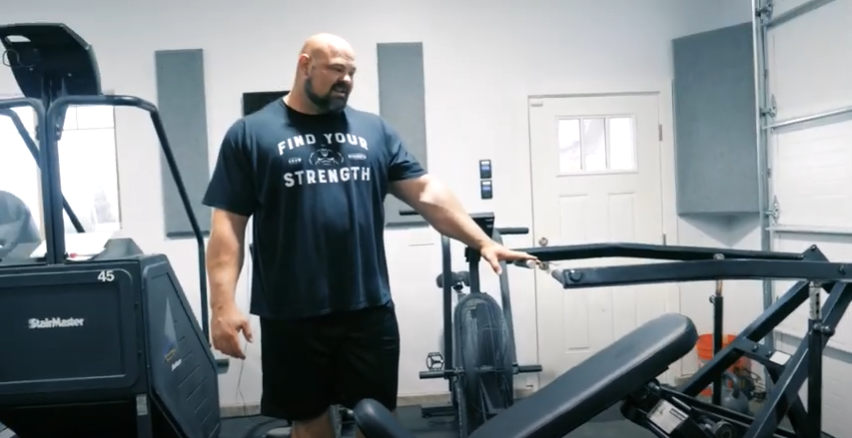 Feel super jealous of Brian Shaw and his bitchin garage gym? Well, he’s not done yet with bragging about his new gym toys. Next up, Brian shows some more cool stuff he got from Rogue to play around with. He go empty sandbags to work on his speed(I feel I should note that he won’t be running around with empty sandbags, he will fill them up), a 200lbs Rogue rubber Atlas stone and a fancy new mat with a foam roller.

As I write this I am seething with jealousy for Brian Shaw’s ever-growing giant barn gym and his ever-expanding list of gym swag and toys. I dare anyone to find a bigger and cooler looking home gym. I think at this point Brian Shaw’s barn gym has got to be the biggest collection of weights and weight lifting equipment assembled in a single location that is not a warehouse or a public fitness facility.  The crazy thing is, his gym is still growing. I’m willing to bet that in the next few years the worth of his giant barn gym will double in equipment value.