Brian Shaw Goes A Hard 8 Reps Of 150lb Dumbbell Press, And Shares His Secrets To Surviving A Tough Workout 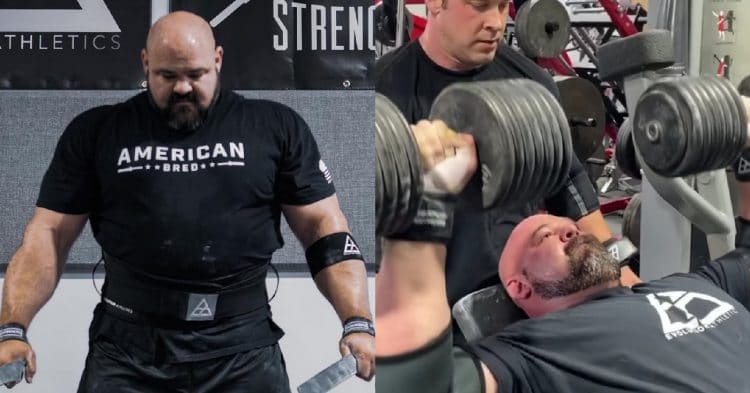 As one of the most popular strongman athletes of all time, many people look to Brian Shaw for advice. He recently shared some of that wisdom, after hitting an insane dumbbell press in the gym.

Over the years, Shaw has proven to be an extremely likeable person. Even regarding issues of controversy, he always manages to find a way to be diplomatic and avoid making anyone angry. This, combined with the skill that led him to multiple World’s Strongest Man victories, has led him to being one of the most well known figures in the sport.

These skills were on display recently, when Brian Shaw posted to his Instagram. He shared a video of a gym session that saw him going eight reps with a 150lb dumbbell press. However the post itself revealed that he was actually struggling with this set, even though it does not look like it. So he explained what he does to get himself through these types of hard sessions, and how you can do the same.

“SOME DAYS IT’S EASY AND SOME DAYS IT’S A GRIND…DON’T GIVE UP!
–
This was a tough day of training for me…these 150’s felt much heavier than they should have. I have always said working through the tough days of training is what makes the difference…if you only work hard when you are feeling perfect you will never get to where you want to go. When it’s tough dig in and make it happen! Results are EARNED…not GIVEN!!”

For what it is worth, Brian Shaw did not appear to struggle too hard with this set. However that is just a testament to his mindset and ability to preserve. Comparing this to the 130lb set that he blew through about a month ago, there seems to be little difference in the difficulty.

At the end of the day, it is a bit of a relief to hear that even someone as talented and experienced as Brian Shaw can still have sessions that mentally push him. The experience gained through these types of situations provides valuable knowledge, which he has then decided to share with others.