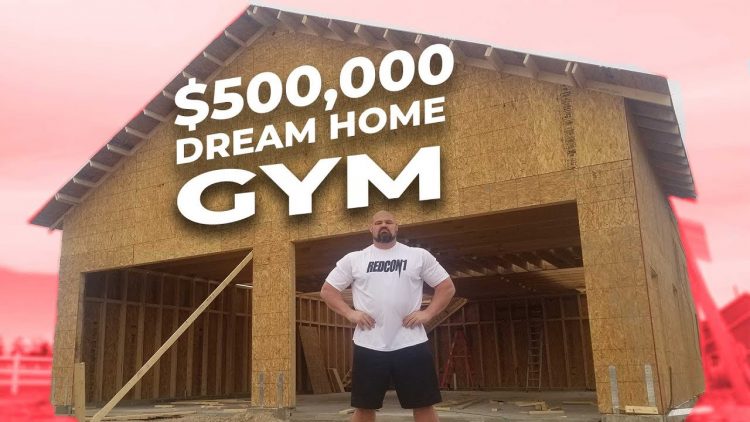 Recently I did an article touring Brian Shaw’s 100k $ garage gym in which he prepares for his Strongman contests. Now, The World’s Strongest Man is now taking things to a whole nother level. His new gym will be at least 5 times the worth and several times the size of the previous one.

As a 6’8” and 400lbs Strongman, Brian is not very suitable for most gyms. Which would make his training and preparation for events like World’s Strongest Man or World’s Ultimate Strongman nearly impossible and limit his potential within the strongman sport. That is why early on in his career Brain just said to himself “you know what? Screw this, I’m making my own gym.“ which was his parents’ garage.

Then he got married, started raking in some serious strongman victories and he moved out of his parents’ garage into his own 100k home/garage gym. Now, he is taking things a step even further.

Brian Shaw hasn’t dropped specifics regarding size but the video shows the construction of a giant barn/hangar-sized space that is Shaw’s future gym.

This gym isn’t only a massive upgrade in size and space, but it will also a place where Brian will be producing(and I’m guessing storing too) all future merch for his “Shawstrength” webshop in the second floor of this massive garage gym.

Brian speculates that the sheer size of this home gym will probably make it one of the biggest personal workout spaces built for a single person and/or a select group of people aka “a home gym” in the world. Looking at the short video above, it is tough to argue with Brian. This really looks like the biggest private workout place in the world. Anything bigger than this is basically a commercial gym.

Of course, the gym construction is not done yet, so stay tuned to fitnessvolt.com because more updates on this gigantic gym is bound to be coming soon.