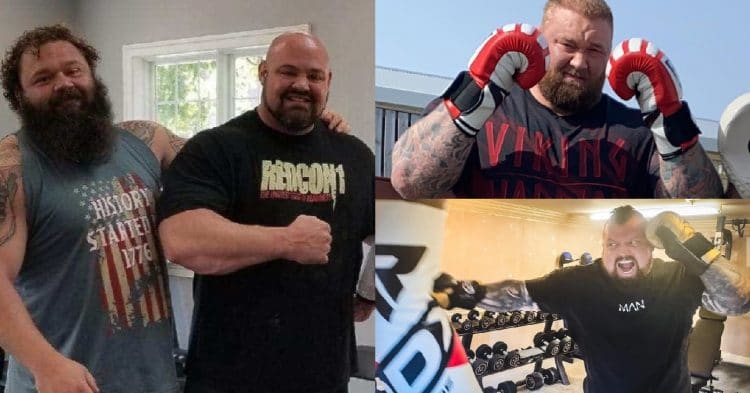 It seems that right now, the hot topic in strongman is the upcoming boxing match between Hafthor Bjornsson and Eddie Hall. Now two of the biggest names in the sport, Brian Shaw and Robert Oberst, give their assessments on how the bout will go.

Shaw and Oberst have both been watching closely as the feud between their fellow strongman competitors turn into a boxing match. To be honest, it has been hard to not be glued to this situation, as it is the two best deadlifters in the world settling their beef with fisticuffs. As a result it has everyone in the sport buzzing with excitement.

Naturally, when Brian Shaw was doing a Q&A with Robert Oberst, for his YouTube channel, the topic of this fight came up. Someone wanted to know the opinions of these two men, who know both Thor and Eddie fairly well. So they were asked how this fight may go.

“”That’s been a really popular question,” Oberst saus. “And I’ve thought about it a lot, obviously. It’s hard right now, it all depends on who takes training more serious. They have over a year to prepare for it. Is Eddie going to keep the same traveling schedule, and do as much as he’s been doing, or is he going to back off and train? And is Thor going to start doing a bunch of traveling now that he’s retiring from strongman? So it really depends on who wants it more. They’ve got enough time now where that’s the deciding factor.”

“I would agree with you man,” Brian responded. “It’s so far out that it’s really hard to say. I think if they were to fight now, I would put my money on Eddie, simply due to the fact that he grew up in a much rougher area, he’s been in fights, he’s actually trained boxing for conditioning work. If you picked it right now, I would have to say he’s ahead, just simply based on that stuff.

But again it’s so far off, and it depends on who are their coaches, what is their training, who are they working with, that type of thing.”

Brian Shaw and Robert Oberst go on to explain how this is a different world, and there are a lot of unknown factors at this point. However they say closer to time it will be easier to put a finger on who may come out victorious. Whoever puts in the work, and gets their conditioning in the right spot, will end up winning the night.

Robert goes on to ask Brian who he thinks will actually train harder. While Eddie had a hard time deciding, Rob had his own thoughts on the matter.

“At this point right now, the way that it’s looking, I would guess that Eddie is acting more serious about training. I don’t know if that’s to do with the lockdown, or if Eddie’s just being more vocal about what he’s doing.

“From what I’ve seen from Thor, it looked like he had a couple of one-on-one little MMA padded sessions, with a guy by himself. That’s also probably because of the lockdown and everything, but it didn’t seem like he’s flip the switch. He’s not changed, he still looks like he’s in the process of becoming a fighter, in his own head. He isn’t quite there. Whereas, Eddie pretty much dove right in. So I think that’s what you’re going to see from him.”

It would seem that Robert Oberst is leaning towards picking Eddie Hall. However Brian Shaw still seems on the fence about his pick. It will be interesting to see how these guys look, as it gets closer to next September.