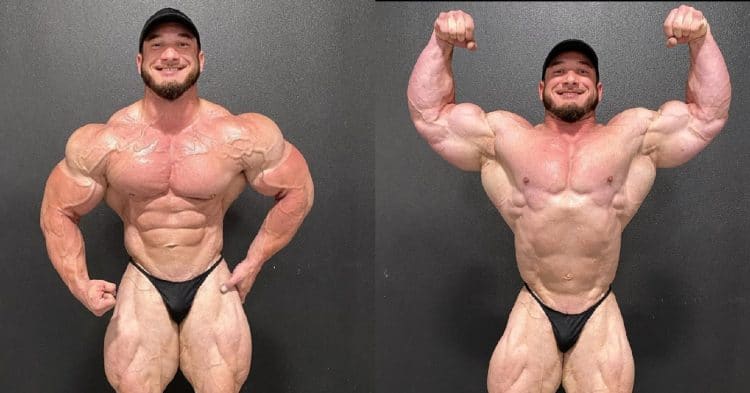 After a successful debut at the Tampa Pro, Hunter Labrada is now looking ahead to the 2020 Mr. Olympia. About four months out from the show, he is looking absolutely bricked up.

Heading into the Tampa Pro, all of the discussion centered around the son of bodybuilding legend Lee Labrada. Hunter was making his professional debut, but was a major favorite to win the show. This would prove to be the case, as be outclassed his contemporaries, establishing himself as a force to be reckoned with in the Open Division moving forward. Not only that, but it secured his invitation to the 2020 Mr. Olympia.

Ahead of this massive opportunity, Hunter Labrada has been focused on the task at hand. However he could not contain his excitement, so he chose to upload a physique update to his Instagram. Here he shows his progress, 18 weeks out from the show. Furthermore he breaks down the diet he has been using to help build and sculpt his physique.

“18 weeks out from the @mrolympiallc 😎 surreal to type that😬 Yes, I am aware I have a very anabolic farmers tan😅
–
260lbs fasted 263lbs post training
–
Well, after being home 3 days in 3 weeks, I finally made it home to train with @btroianello at @legacybarbell, and damn it felt good to be home🙌🏻
–
Training: train since the show has been good! Definitely have been being safe, as post show while your body is rehydrating and recovering is prime time for injuries to happen. I was chomping at the bit to get back to training hard, but after @btroianello and I’s push session today, I’ll say we’re back to business😎
–
Nutrition: last slide is current diet! Post show I kept it very tight because of shoots and my guest posing in Colorado, but after that I loosened it up a little, and moved to what you see on the last slide.
–
Cardio: Zero minutes since the show. Giving my knees and ankles a break, and letting my body really put the calories to work. If my digestion starts to go I’ll throw 15-20 min post workout in.
–
Looking forward to doing these every week all the way til the O! Plan on being as transparent as possible, and letting you all follow along!”

There is still a long time until the 2020 Mr. Olympia goes down, but Hunter Labrada seems to be ready to bring a complete package to the stage. He has some room to grow, but he will definetly be an intriguing addition to an already stacked lineup of talent. It will be interesting to see how he looks compared to the likes of Dexter Jackson, Brandon Curry, and of course Phil Heath.