'The Mountain Dog' goes into detail about his recent, harrowing health experience 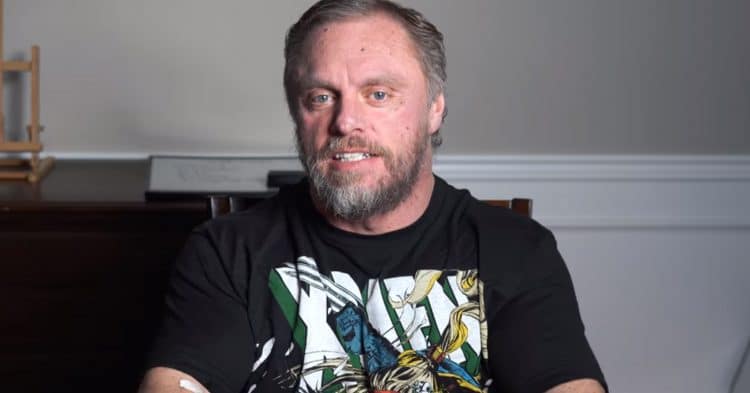 We recently learned that popular bodybuilder and entrepreneur John Meadows was rushed to the hospital due to a heart attack earlier this week. His wife Mary shared a few updates that revealed he had blood clots in his arteries. But Now, Meadows is back home and thankfully, he’s alive and OK to tell of his experience.

BREAKING: John Meadows Has Passed Away at 49

So the video started off with Meadows answering the question of if it really was true that he had a heart attack. And his response was…

Then, he went on to describe his terrifying experience…

“Monday started off just like any other day, I felt good I was doing some exercise with a friend. And I started feeling some chest pain right in my sternum and it was unlike any other pain I’ve felt before.”

Meadows felt as if he dropped a bar on his chest and had a hard time breathing which he explained was a very scary feeling. So he thought it might have been anxiety since it can have similar symptoms. However, it started to get worse and he fell off the bench onto the floor of which he then tried to stretch out to see if that’d help.

But that obviously wasn’t the case. “5 or 10 minutes passed and I told my friend, I think you should probably take me home,“ he explained. His friend asked if he wanted him to call the squad and so Meadows sat there for a minute and decided that this wasn’t the time to try to be a tough guy but rather, it was time to call for help.

So the squad came shortly thereafter of which they hooked him up to electrodes and off they went to the hospital. As he was riding in the ambulance, he asked what was happening…

“I asked him what’s going on because I could see he was studying the readings on my heart pretty closely and he said you’re having a heart attack right now. So I said ok, this is getting real“.

So he was given some baby aspirin of which he chewed up and then he described the thoughts going through his head.

“Then all of a sudden it hit me, like this could be your last day on Earth. I just started thinking about my family. I didn’t have a dad and I wanted my kids to have a dad growing up and I was thinking I was getting ready to put them in that position.”

Meadows explained that when arrived at the hospital, there were people waiting to tend to him which was scary but as comforting as the situation would allow for because at least he’d be getting help. So they stuck a tube through his arm into his heart so that they could see what was happening.

So they found some blockages and blood clots in his arteries. Meadows said a blood clot was in the worst spot it could be in which is likely why he was in such bad pain. He described the feeling as “someone ripping his sternum out“.

He then mentioned the Morphine that they gave him wasn’t getting rid of the pain. They couldn’t give him any more and they tried other medications however, the pain still did not go away. So that night he had to deal with extreme pain. He said the next thing they did was give him three IVs to help with the blood flow and pain.

Meadows woke up the next day still with bad pain and they went through the same process of placing the tube up his arm to look at his heart.

And the Doctor told him that the left artery where the big spot was is clear. However, there was still a small spot that was risky to try and clear out. So as the day progressed, he started to feel better although the pain had not completely subsided.

But Wednesday was the day he started to feel much better and they were taking his blood to check the thickness, several times throughout the day.

And then later on in the day, Meadows said he was able to finally check his phone of which there were thousands of messages which he felt extremely grateful for. He mentioned that he hasn’t been able to read them all but he will get to them.

He then talked about how they decided to do a procedure where they stick a camera down his throat. And this was all too familiar for him because he had the same test done in 2005 when he had a blood clot in his colon that caused a vein to explode.

So after the evaluation, they found that his heart was normal size and plaque build-up was not a concern either. Meadows explained that plaque is a big concern for bodybuilders which could be from certain food or chemicals. His arteries were in good shape though.

But what is concerning, is that they couldn’t find out what caused the blood clot. And because his heart was functioning at 10% less than it should, there’s a possibility it could come back.

“That’s probably just going to depend on me over the next couple of months, just being smart not being stupid, taking the medications like I’m supposed to take.”

Meadows was told that he’d need to take baby aspirin for the rest of his life and that he probably should have all along since his 2005 health scare. He admitted to not being consistent with taking it though but this experience would certainly be the wake-up call that he needs.

Meadows has no doubt that he’ll be back and feeling good in no time though if he does everything right. But thankfully, he’s back home and taking before he eventually gets back to business. As far as his lifestyle habits, he doesn’t see a need to make any dietary changes of which the doctors agreed.

“I think just be smart and listen to the doctors is my plan and just basically stay taking my medications. I’m not supposed to strain a lot in the next two weeks, but he said you should be able to train once we feel like your heart is coming back and it can do its job.”

Obviously, training extremely hard is out of the question which is hard for a bodybuilder but he’s definitely not stubborn when it comes to his health.

John Meadows ended with, “I’m very very happy to be alive“. He then had some closing words and wrapped up the video.

Here’s the most recent update before Meadows left hospital.

We’re very happy to hear John Meadows is currently home and recovering, and we wish him a quick bounce back so that he can return to his normal, daily life without any other issues arising.

7 Reasons To Have a CrossFit Girlfriend

There have been a lot of unexpected and untimely deaths in the sport of bodybuilding, over the last several months....

The bodybuilding and greater strength sports community was collectively heartbroken to hear the news that John Meadows had passed away....

The bodybuilding world was rocked to its very core at the news that John Meadows had passed away. Now we...