It was a "very sad day" for Strongman legend Brian Shaw who removed his poster of bodybuilding icon Arnold Schwarzenegger from his gym wall, following a recent comment regarding the Covid-19 situation. 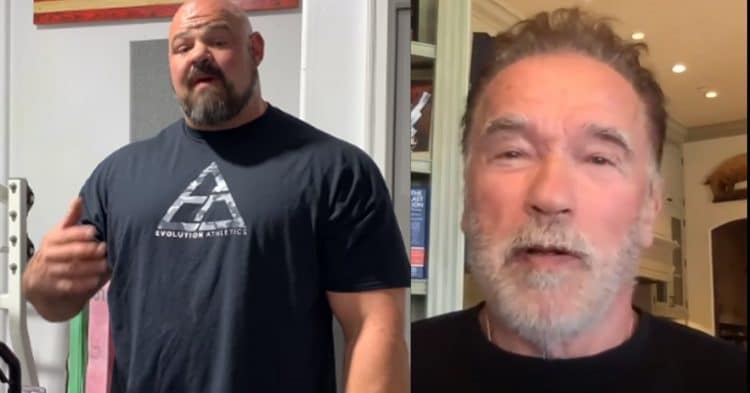 4x World’s Strongest Man champion and proud American Brian Shaw was very disheartened and seemingly repulsed after a recent comment by the iconic Arnold Schwarzenegger, which didn’t sit well with many.

The former California Governor is known to be very vocal about certain issues and the Covid-19 situation is no different. In fact, he’s commented many times on the subject which is to be expected.

And while Schwarzenegger has the right to his opinion and beliefs on using preventative measures during this health crisis, it was the words, “screw your freedom,” that caused a big uproar and lost him a lot of longtime fans in the process.

“I think people should know there is a virus here,” said Schwarzenegger. It kills people, and the only way we prevent it is to get vaccinated, to wear masks, to do social distancing, washing your hands all the time, and not just to think about well my freedom is being kind of disturbed here.

“No, screw your freedom!“

He also wrote a caption on the post that read,

“You have the freedom to be a schmuck. Just because you can, doesn’t mean you should.”

Brian Shaw took to Instagram with a message of his own…

“There are a lot of people in our country right now that have forgotten that freedom is very important,” he said in the video.

Shaw has had a poster of Arnold Schwarzenegger on his gym wall since he started training because he explained the 7x Mr. Olympia was a huge influence on him.

But that will no longer be the case.

He included the following written message in his post…

“FREEDOM IS IMPORTANT 🇺🇸
–
Today is a very sad day for me as I had to take down the poster of @schwarzenegger on the wall of my gym. I have had a poster of him in my gym since I started training.
–
He has the freedom to say whatever he wants and that’s part of being an American citizen but him saying “screw your freedom” did not sit well with me and therefore it was time for his poster to come down from my gym wall.
–
Freedom didn’t come free and I will always stand for freedom 🇺🇸“

Everything you need to know about how Shaw was feeling at the moment could be seen on his face and with his body language as he brought down the poster and walked away from where it hung.

Aaron Singerman, CEO of supplement brand Redcon1 was also extremely disappointed with what was said. As a result, he’s decided to boycott the upcoming Arnold Classic and not participate as a sponsor.

“When somebody says ‘Screw your freedom,’ I can’t and Redcon1 can’t, in good conscience, continue to spend hundreds of thousands of dollars sponsoring that show with a name honoring that person. So there’s no way that I can continue, Redcon1 can continue supporting the Arnold Classic for the future,” Singerman said.

“When you say screw your freedoms, or you’re a schmuck, or a moron, or anything else because you disagree with somebody… I’m not for canceling anybody. Don’t cancel Arnold, but don’t support him, if you’re me. If you like it, go there. I won’t be there unfortunately, so if you’re looking to see Kai Greene and the rest of the Redcon1 athletes and myself, unfortunately you won’t.”

Singerman also mentioned that Kai Greene and other Redcon1 sponsored athletes won’t be there in September either.

The situation has stirred up a lot of emotions and this will likely continue to be the case, especially since it involves what appears to be a controversial comment made by a prominent public figure in Arnold Schwarzenegger, on such a sensitive topic.

What do you make of this whole situation?

Fitness and Fat Loss: How Much Cardio is Too Much?