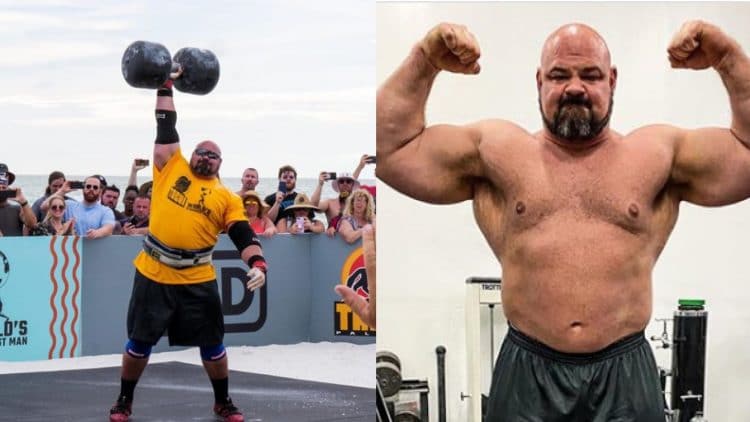 Brian Shaw has been working on becoming more of a lean strongman. That work has been paying off big time, as he showed in a recent update, while in prep mode.

Shaw is one of the most respected strongman athletes in the world. Winning the World’s Strongest Man four times, plus thrice at the Arnold Classic, makes him one of the most accomplished, for sure. Even still to this day, he is a force to be reckoned with, every time he is on a competition roster.

In recent years, Shaw has been making some big changes in his training and diet routines. Although he still could eat like a strongman, he has largely been dieting. As a result, he has lost an incredible amount of weight. To some, this is believed to have caused a decline in performance, and that less weight means less muscle.

However, Brian Shaw does not much care for these criticisms, and has been working hard to prove people wrong. He recently posted to Instagram, giving an update prior to the Arnold Strongman USA event. This is a last-minute options to qualify for the 2020 Arnold Strongman Classic, which Brian has yet to qualify for. Therefore, he is taking this contest seriously, which is evident in the photos.

“I decided to put my head down and train without distractions to get ready for the last Arnold Pro Strongman qualifier…and it was not an easy prep with multiple challenges I had to deal with and overcome but I stayed the course and I feel good about where I am at heading into the contest.

All the work is done and all that is left to do is go put all the hard work on display Saturday and get my qualification spot to the Arnold in Columbus!!

If you want to come watch there are still a few tickets left…just go to www.arnoldstrongmanusa.com. A portion of the proceeds go to support firefighters and their families. This was a great event last year hosted by @schwarzenegger and I’m sure this year will be even more awesome!”

The challenges that Shaw refers to is likely in reference to the fact that he has been dealing with injuries for a while. Between that, and filming a television show, he has certainly had plenty of distractions in his life. Nevertheless, he is steadfastly focused on this upcoming contest and the goal of getting a spot at the event in March.

Time will tell how Brian Shaw will do at the Arnold Strongman USA, this Saturday. However, there is no denying how lean and muscular he looks here, so that is a positive sign.