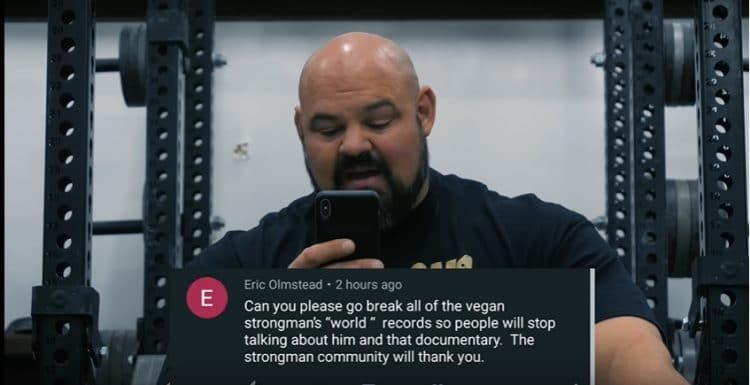 Brian Shaw is probably the nicest man on the internet. He’s soft-spoken, very polite, always smiling. Yet when the going gets tough, Brian gets going. He’s a 4 times World’s Strongest Man winner and 3 times Arnold Strongman Classic winner.  When it comes to Strongman competitors Brian is an all-time top 5 athlete ranking in with some of the strongest humans that ever walked this planet.

Patrik Baboumian is probably the strongest guy on the planet that’s fueled by plants and vegan based foods. He’s a competitive Strongman that holds several German world records in Strongman, accompanied by the title of Germany’s Strongest Man which he won in 2011. In a sport dominated by carnivores and omnivores, he is very unique in achieving his strength records by eating no meat and no dairy.

Patrik has been seeing a resurgence in popularity thanks to a recent documentary called “Game Changers” that promotes the health and sports benefits of a vegetarian and vegan diet and Brian is as popular as always thanks to his ever growing YouTube channel,  media exposure of the Strongman sport and “Strongest Man in History” tv show.

Even though both Patrik and Brian are Strongman they have never met each other in a Strongman competition. What brings these two together is a recent Q&A session hosted by Brian Shaw on his youtube channel.

In the video, Brian is asked by a fan if he can go and break all of Patrik’s world records just so people would stop talking about the “Game Changers” documentary. Brian’s response was a bit on the passive-aggressive side but an honest and humble answer as always.

In the video, Brian tries to put things into perspective regarding Patrik’s records. Patrik’s official “world” record for the super yoke is 555kg for 10 meters. However, in 2017 Arnold Strongman Classic competitors had the heaviest yoke walk event in recorded history of Strongman events, weighing in at 710 kg. As you can already guess, Brian won that event.

After putting himself over and proving that he’s a gigantic human being capable of lifting nearly impossible weights, Brian issued an open invitation towards Patrik. Brian openly says in the video that if Patrik feels he has a legit claim for a Strongman world record he is more than welcome to come to Brian’s epic garage gym and prove his strength.

Last time I wrote about Patrik, a very large number of angry vegans started whining in the comment section. Few things need to be put into perspective here. When it comes to “pound-4-pound” strength, Patrik could hang with the best of them.

However, he is just too light and too short for modern-day Strongman events and competition. Wikipedia list Patrik’s 2007 height and weight at 1,71cm and 116 kg. I’ll assume Patrik put on some pounds in the meantime and weighs 10-20 kg more than he did 13 years ago.

That would put him at the 130kg range. One of the smallest competitors in professional Strongman is Dimitar Savatinov who is 177cm tall and weighs at 150kg, who most of the time looks like he is two deep breaths away from a heart attack. So assuming Patrik is 20 kg heavier than his wiki stats, that would still put him nearly 20 kg lighter and 7 cm shorter than Savatinov.

If you want to know how a massive weight gain affects your performance lookup Larry Wheels’ (who is taller than Patrik by nearly 20 cm)journey to becoming a pro Strongman. Bulking as a hobby isn’t as fun as it sounds. However, to be fair to Patrik a recent trend is showing that ideal top Strongman weight is no longer the bloated 190kg monster like Eddie Hall was or a tall mass titan like Thor or Shaw, but lighters and faster 150-160kg guys. Stoltman brothers, Martins Licis, Mateusz Kieliszkowski– all guys that weigh less than 160kg and are currently the top 5 Strongman of the world. So it could be entirely possible that Patrik puts up enough bodyweight to at least try to compete with the top guys.

Ultimately, it doesn’t even matter who eats what. The physical stats put Patrik at a significant disadvantage should he choose to accept Brian Shaw’s open invitation or compete at any high-level Strongman event. Patrik is 171cm, with a 130ish kg bodyweight. Brian Shaw is 203cm and weighs at around 180kg when he’s “slimming down”.  But all of that doesn’t matter, if Patrik takes Brian up on his word, shows up, and wows the internet with his feats of strength.

Luke Stoltman is currently in Sacramento, CA, where he is attempting to win the 2022 World's Strongest Man. However, just...