Brian Shaw shows off his new gym, which was specially made for his Strongman training. 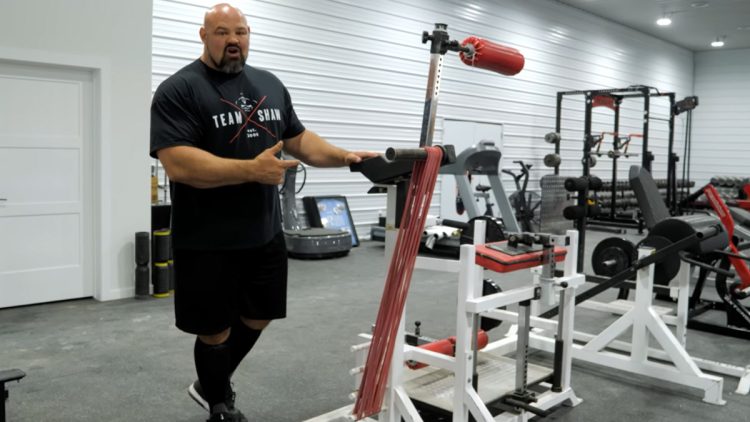 Historically, training for strongman athletes has been difficult due to their massive frames, which can’t fit into regular machines. This is why Brian Shaw decided to build his own gym. He did not spare any expense to make it perfect, since he will be spending a lot of time training in it. His gym has been in the making for many months now, with the recent unveiling proving why it has taken so long to complete.

Brian Shaw gave a full tour of his new gym and posted it on the SHAWSTRENGTH YouTube channel. It proved to be absolutely huge and filled with machines that will help Shaw prepare for his next competition in the best way possible.

Upon showing off his first two pieces of equipment, which were the Reverse Back Extension and a Back Attack, Brian Shaw revealed that almost nothing in his gym is normal. He modified many machines in order to either fit in them or be able to put on more weight.

“Anything can be modified and made stronger. That is what a lot of equipment that I have had to go through. Just because I beat it up.”

Brian moves on to his warm-up/recovery zone, where he has lined up some machines. The first one is a Swisswing, which vibrates and can calm down muscle soreness. Right next to it, Brian Shaw placed a Power Plate that can help with muscle activation. A treadmill is also in this row, but Shaw explained that he does not use it much. The Rogue Echo Bike completes the collection.

Brian Shaw also has a Power Rack from Rogue alongside many attachments. Most interestingly, Shaw attached the Endless Rope Trainer, so he can put the desired resistance and pull for however long he wants. Immediately right off the rack, Brian Shaw placed his impressive collection of dumbbells and fatbells. The heaviest set of dumbbells in Shaw’s possession is 230 pounds (104 kilograms).

The next row of Brian Shaw’s gym starts with a Free Motion Dual Cable Cross machine, which can be used for many things. Next to this is Shaw’s multi-station unit.

“I can do my pull-downs, I’ve got another cable on the side. This side is more for triceps and we got the seated row. Speaking of rows, I kind of set this up a little bit where I can do similar movements together in the same area.”

Shaw also has another variation of the Seated Row and a Seal Row Bench set up in the proximity. Brian then moves on to show off his newest piece of equipment, which is the Pendulum Power Squat. This was customized for him, so it is a unique machine. He has a few more Pendulum machines lined up. These are the Reverse Glute Ham, Leg Extension, Lying Leg Curl, and a Glute Ham Raise.

This part of the gym is obviously for training legs and the lower body. So, Brian Shaw looked hard to find one old-school piece of equipment, which reminds him of his earliest training days. That machine is Flex Fitness Seated Leg Press.

“This was in the original World gym that I started training in. The weight stack is not necessarily heavy enough for me to do double leg work. What I really like this for is single leg work.”

Brian Shaw has stationed a regular Leg Press in this part of the gym as well. However, it is not the huge machine that was seen in some of his videos, as that one will be used for the 2022 Shaw Classic. To wrap up his leg section, Brian Shaw also has a Belt Squat machine, Deadlift Platform, and Monolift Rack.

The middle of Shaw’s gym is decorated with almost every type of barbell imaginable, as well as some chains and resistance bands. In the corners of Brian Shaw’s gym, we can see Atlas Stones, a sandbag collection, Strongman Frame, Yoke, Boxes, Throwing Bags, Tank from Torque, and some more accessories. A few spaces were left free of any equipment so he could perform some Strongman movements, such as Farmer’s Carries and Yoke Runs.

Right up to the wall, Shaw lined up the Standing Calf Raise machine, as well as three chest and shoulder press machines, each one with a different purpose. Finally, Brian also got a heavy-duty Smith Machine and sent a message to all the people hating on it.

“For whatever reason, people tend to think that smith machines are stupid. But I have had a smith machine since I started adding more equipment… There are a lot of strong guys that train on them.”

Brian Shaw will also add some posters and mirrors to make the gym feel like home. It is incredible to think that he started training from his parent’s garage and has now built one of the greatest personal gyms in the world. As Brian now has more space to train, he will also invite more world-class Strongmen to join him, so we can expect some insane collaborations soon.