Brian Shaw was given a run for his money in the recent workout session with The Strongest Couple In Canada. 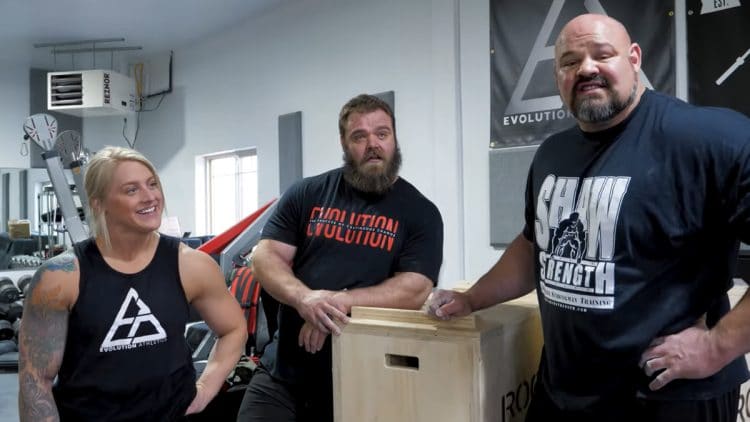 The 4x World’s Strongest Man, Brian Shaw, is on a mission to train with world-class strongmen and strongwomen athletes at his gym in Colorado every week. However, this time he invited elite level Strongman and one incredible Strongwoman competitor to train the press accessories with a primary focus on the bench press. On April 14th, Brian shared a video on his YouTube channel where he joined forces with Maxime Boudreault and Samantha Belliveau, also known as ‘The Strongest Couple In Canada’ for a grueling workout session.

Brian Shaw previously trained with Jerry Pritchett and Gabe Peña for the deadlift workouts. While Kevin Faires was the perfect man to push him to the limits on the behind-the-neck press. However, the strongest couple in Canada joined Brian for a complete upper body workout.

Throughout the training sessions with other Strongman athletes, it has been made very clear that Brian Shaw is extremely professional and that his warm-up is thorough. After introducing the Canadian pair, the video skips to the montage of them doing bench-supported dumbbell rows, incline dumbbell bench press, tricep cable extensions, and cable face-pulls. After finishing the first phase of the training, which Brian calls ‘The readiness’, he was already soaked with sweat.

The first exercise of their workout was the Seal Row, which we know that Brian Shaw adores from his bench press session with Nick Best. Brian even has a special bench and a bent bar to allow proper execution and range of motion. He then explains how important the upper back is, even for press workouts.

“This is a brutal movement to start out, but upper back strength is so important. So even on a press accessory day, we are doing back work,” said Shaw.

The trio performed 5 sets of eight reps with progressively heavier weight. However, something interesting could be seen while Brian was doing his first set. On the wall directly behind him, Shaw positioned a whiteboard. On that whiteboard, four pictures could be seen, as well as the number “43” written with a sharpie.

Each picture was from a year that Brian won the WSM, and the “43” represents the number of days until the 2022 World’s Strongest Man contest. The competition will take place from May 24-29, 2022, in Sacramento, California, and it seems like Brian Shaw is eagerly waiting.

Following the seal rows, they all moved over to the bench press session. They used a swiss bar, which is a bit bulky but allows for the usage of a different grip. Brian also equipped the bar with bands and chains. This all makes the initial stage of the bench press easier than the lockout part.

For the next exercise, Brian whipped out his very specific dumbbells. They are actually spherical, with the opening on only one side. The grip was also inside, so while the strength trio were using them, it looked like they had gloves fitted on. These dumbbells were used for seated overhead tricep extensions. The video then skips to a montage of them doing seated cable rows, front dumbbell raise variation, and finished up with sandbag carries and load.

Brian Shaw is definitely chasing his fifth title, which would equal him with Mariusz Pudzianowski as an athlete with the most wins in the WSM. All eyes will be on him as he has to battle some younger guys, but Brian does not show signs of slowing down. The experience is on his side and the desire for winning is definitely there, so it will be fun.

Maxime Boudreault placed third at last year’s WSM, so he will be chasing for at least another podium finish, but if everything goes well, the title could be his. Samantha Belliveau is 2022 U82 Arnold Amateur Strongwoman World Champion and 2021 Canada’s Strongest Woman, so she knows how to win. She is also his greatest supporter, and Maxime expressed on multiple occasions that Samantha pushes him to the limits. Overall, it is great to see the second and third-place finishers from the 2021 WSM train together.