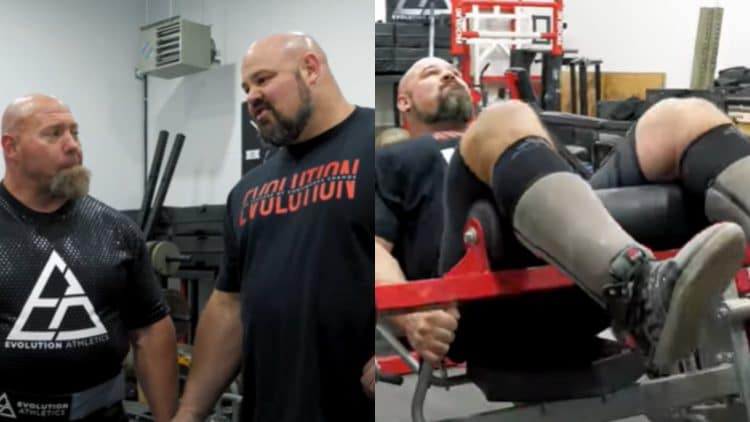 On the other hand, Nick Best has established himself as a legitimate force in powerlifting. Despite Nick’s highest placement at WSM being sixth, he’s proven time and time again that he possesses insane strength.

Below are the exercises that Brian Shaw and Nick Best implemented in the video.

Shaw shared the workout to his YouTube channel and discussed the regimen of exercises he has planned with Nick Best.

“What’s up guys, hope you all are doing well. I’m here with my buddy Nick Best, and we’re in the Mountain Gym about ready to throw down a very interesting training session. A lot we were just having a talk and Nick has not done, basically the majority of everything we are going to do today.

So, a lot of firsts, we got our readiness coming up, we’ve got some rdls, dumbbell single leg rdl, which you’ve done before and then we’ve got back attack which you have not done. And then reverse hypers, which you also have not done, so readiness will be fun and then we have got shoulder elevated hip thrusts, with a 2-second pause at the top, how do you feel about that?!” Brian Shaw said.

After working with Brian Shaw, Nick Best looked enthused throughout the rigorous routine. Since many of the exercises were unfamiliar for Best, Shaw adjusted the weights so that the pair of strength athletes could lift safely. Even after passing the age of 50, Nick Best is an elite level Strongman. In fact, Best deadlifted 500lbs for a blistering 50 reps at 53-years-old recently, showing that age really is just a number.

“We might just drop off his reps, because he’s never done this before. Last set was 480lbs. Alright so we’re moving on to a shoulder elevated hip thrust we got the activation band on. This is going to be done with a two second hold at the top. I’ve got set to 12. Shaw stated. Nick is doing this for the first time so he’s going to jump in with 6s and feel it out but it’s going to be fun it’s going to be work, we’re going to get it done.”

Following the elevated hip thrusts, the pair finished with a super yolk routine and Shaw underlined that rest period will be brief.

“100 percent. I mean, you’ve done a lot of new things and I think it’s looking good but we’re going to do somehting now that you’re very familiar with and it’s the super yolk but it’s an emom, you know what that means, every minute on the minute. So you know rest periods, you know are going to seem very short with this. Fifty feet carry, not a big weight, in our terms but every minute on the minute fifty feet and just 20 sets.” Shaw concluded.

Sharing his insights with his 1.7 million YouTube subscribers, Shaw and Nick Best hit a variety of exercises to great effect. Shaw and powerlifting champ Nick Best made the most of their explosive hip thrust training session.

Strongman legend Nick Best has continued to push past his limits as he got into his 50s. Nick's insane feats...