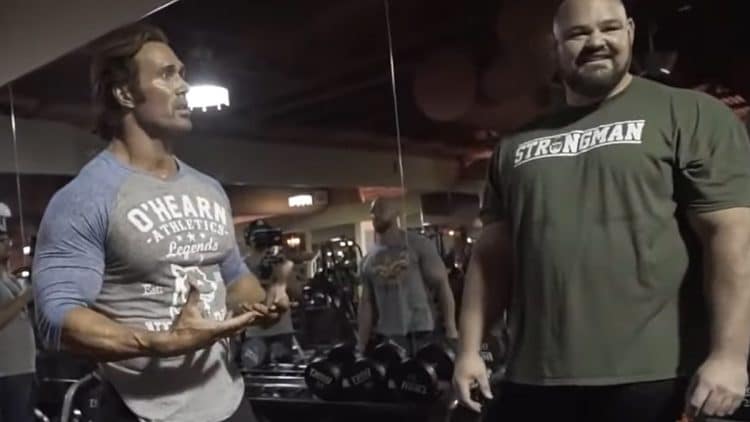 Strongman Brian Shaw recently went through a gym training session with bodybuilder and powerlifter Mike O’Hearn. Known for his longevity and incredibly aesthetic physique at 53 years of age, Mike O’Hearn has had a successful career in the modeling and fitness industry. He is a 4-time Mr. Universe and 4-time California powerlifting champion in addition to being a strongman and California Judo champion. Brian Shaw is one of the most successful strongman competitors in the history of the sport and a four-time winner of the World’s Strongest Man competition.

Mike O’Hearn and Brian Shaw recently went through a chest workout. Over the course of this session, O’Hearn familiarized Shaw with a lot of his own techniques and spoke candidly about his life and fitness journey. The video of this session was uploaded on Mike O’Hearn’s YouTube channel.

Mike O’Hearn and Brian Shaw go through a chest workout

Mike O’Hearn started the training session with an incline bench press with barbell. Brian Shaw finished the warm-up sets with a 45lbs (21kg) weight plate. Mike O’Hearn explained to Brian Shaw that performing warm-up sets with slow and controlled movements with sufficient rest periods between the sets is important to conserve the energy and not get exhausted before starting the actual workout.

“I’ll get warmed in between and not during it. If (the chest muscles) kind of gets the blood flowing and I give up no energy during the warm-up, where as everyone is just fatigued by the time they are done with warming up.”

“So honestly that’s… You come in, solid moves. I don’t speed it. Just kind of move it through and it just works for me. I’m always in a deficit. So I don’t waste a lot of energy,” Mike O’Hearn said.

Mike O’Hearn and company slowly worked their way up to five plates for the working sets and jumped to the next exercise.

Mike O’Hearn had a candid conversation about his upbringing and family environment with Brian Shaw and others during the workout. He explained that being the youngest of nine siblings inclined to martial arts and fitness played a major role in his fitness journey.

“It’s not just us did martial arts… the bodybuilding, the powerlifting. My sisters too… So you got older sisters that were kicking you… Straight kicking you at home! (Laughs)

O’Hearn added that his father was a football player and a bodybuilder while his mother was a martial artist. He further stated that his parents did not force their kids toward strength sports or martial arts and it was the innate interest that compelled them to take up that lifestyle.

“Downstairs (in our home) we had four bunk beds that my dad built on the wall and that was all just weight room. So it was one of those things where I am not going to bed until you stop lifting kind of thing. They would be doing sit-ups, push-ups or squats and then I would be doing it…” Mike O’Hearn said.

In addition to the family environment, his genetics and natural potential helped Mike O’Hearn achieve an enviable physique.