Brian Shaw has managed to eat all vegan food and get the same amount of calories as he normally does. 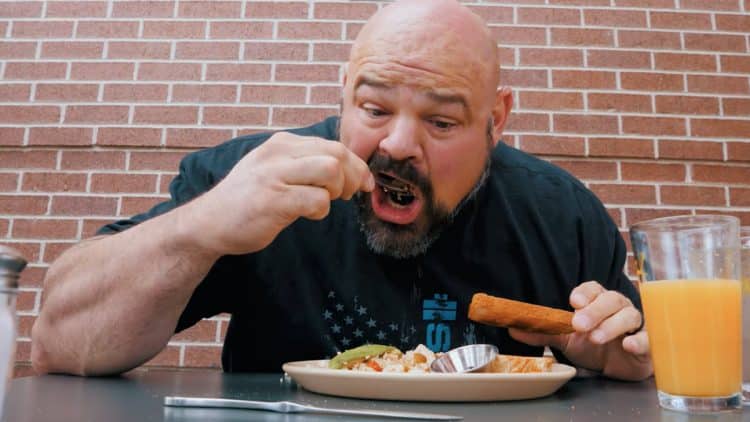 Throughout our childhood, we were taught that food serves as fuel and is therefore essential. Consequently, the more energy an athlete requires, the more food they need to consume, especially if they have a large physique like Strongman. This is the case with Brian Shaw, who has claimed the title of World’s Strongest Man four times already. He is living life at around 400 pounds (181 kilograms) of bodyweight. Due to the amount of energy he expends in training sessions each day, Brian must consume a massive amount of calories to maintain his weight.

Brian Shaw has already shared his full day of eating on multiple occasions where he averaged around 9,000 calories. Brian, however, found a way to enjoy consuming that amount of food daily, but is always making changes to his diet. This time he challenged himself to only eat vegan food for a full day. For someone who is used to eating pounds of meat per day, this was obviously very hard for Brian Shaw. He shared the video to his YouTube channel on September 19th.

Brian Shaw’s first vegan meal of the day was the Tofu Scramble with added sweet pickled peppers, avocado, and even more tofu. In addition, he ordered two portions of this. Brian Shaw, however, was already struggling with the taste at the beginning of his day, comparing the forced eating experience to the beginning of his career.

“I gotta say, going through everything I had to force feed with my diet, early years trying to gain weight and that type of stuff. That was, I feel like, almost easier.”

Meal number two for Brian Shaw was from a vegan food truck, where he picked up six soft tacos with seitan (vegan meat substitute), one order of seitan wings, and one order of fries. Although it was not his favorite, this meal was much better than his first one, especially because of the fries. However, he was not able to eat the seitan wings.

For his third meal of the day, Brian Shaw took some stuff from Trifecta. So, his meal consisted of a lentil power bowl with herb-roasted potatoes and plant-based beyond meatballs. He also took quinoa and veggie bowl with plant-based chicken, as well as some Beyond Burgers. Everything seemed tolerable for Brian Shaw, as he described everything as “not bad”.

“Certainly for me, not going to ever replace bison and that type of stuff, but I tried it.”

Related: How Many Calories To Eat Per Day Calculator

Through some online research, Brian Shaw found a place which makes a vegan pizza for his fourth meal. It obviously consists of vegan cheese, crust, and everything else. This was Brian’s favorite meal of the day at that point.

“The cheese is different, but the sauce is phenomenal… Overall, the flavor is good. Not surprising, this is now my favorite that I had… I am hoping it sits a bit better on my stomach.”

Brian Shaw ended the day with some dessert, having found a place which serves vegan frozen yogurt. He picked a soft-serve pineapple flavor, but he also topped it with pineapple chunks.

Brian Shaw did not reveal how many calories each meal had, but according to the title of his YouTube video, his full day of eating came out to 9,000 calories. However, he ended up having some stomach issues.

“My stomach has been under distress since breakfast, because I can’t process the food that I am eating. So, I felt like I have had a lot of pain issues… That is probably the biggest downfall.”

This full day of eating has been one of the most difficult ones for Brian Shaw so far. In spite of his stomach issues, he doesn’t expect these to cause any problems in the course of his career and training. since he has decided to take a break for the remainder of this year. This is probably the reason why Brian decided to take on this vegan challenge, since he now has more free time to enjoy some fun stuff and record videos.