The reigning 212 Olympia champion revealed that his plan is to 'add graininess through his muscle bellies' and balance out his conditioning. 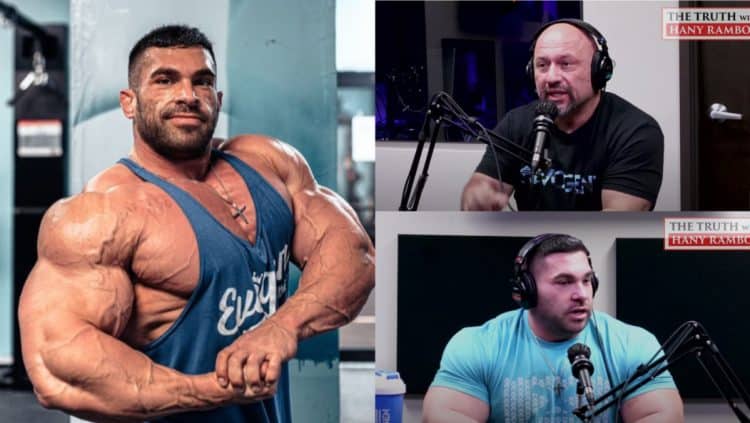 212 Olympia champion Derek Lunsford, one of the most talked about athletes in the IFBB Pro League, will compete in the Open division at this year’s 2022 Mr. Olympia contest. In a recent video, Lunsford and his coach Hany Rambod reflected on getting the special invitation before discussing how they plan to approach their prep.

“I have to do my best and present my best physique, and the placings are out of my control. If I can inspire other people, then I think I can win,” Lunsford says.

In May, 212 Olympia champion Derek Lunsford’s name skyrocketed in the sport following a guest posing appearance at the 2022 Pittsburgh Pro. He stood on stage alongside a number of elite-level Open competitors like Nick Walker, Hunter Labrada, and Brandon Curry — all of which placed in the top five at last year’s Mr. Olympia contest.

That same month, Lunsford’s coach Hany Rambod hinted that he and his pupil were considering the Men’s Open division. Rambod said they were weighing it as an option after learning that Lunsford might not make the weight for his title defense in the 212 division.

Rambod’s worries were shared by Olympia President Dan Solomon, who also doubted Lunsford’s ability to safely make weight for 212. In July, Solomon hinted that the organization was evaluating a special invitation for Lunsford. He added that Derek was “nowhere near” 212 at this point. Sure enough, on September 15, 2022, Lunsford officially received/accepted an invitation to compete in the Open class for this year’s Olympia contest.

Special invitations are not uncommon in the sport of bodybuilding. In 2020, two-time Mr. Olympia Big Ramy received one after he was unable to qualify for the show based on points when he missed a contest due to a positive Covid test. Interestingly, Ramy won that year at Olympia. In addition, bodybuilding veteran Kai Greene and the late Cedric McMillan have also received special invitations for Olympia.

Some have argued that special invitations are unfair because athletes should have to qualify for the prestigious show based on merit. Iain Valliere was among them, and he believes Derek still had plenty of opportunities to win an Olympia qualifier. Clearing the air, Lunsford sat down with his coach to discuss their intentions for the upcoming season.

Hany Rambod and Derek Lunsford Open Up on Special Invite: ‘It Was Just a Matter of Timing’

During the video, Hany shared that Derek is following a similar path Hadi Choopan took back in 2019. The 212 standout switched to the Open but instead of waiting for an invite, he qualified at the 2019 Vancouver Pro.

“Hadi Choopin could have won the Olympia in 212, but instead qualified for the Open in Vancouver [back in 2019]. I told him the same thing I told Derek, and he ended up doing Vancouver qualifying for the Open.

Derek always wanted to be an open competitor, but he had to lose muscle getting ready for 212. It was just a matter of the timing. We started training together and everything started clicking, but certain things weren’t really optimized,” shared Rambod.

Derek Lunsford said he felt his ‘body wanting to grow’ during his most recent off-season.

“I could just feel my body wanting to grow,” said Lunsford. “After earning the 212 Mr. Olympia title last year, I took a break for a little bit, but I just wanted to keep getting better every single day. For me, it was like we achieved something, and now I want to see how much better I can be. So I just didn’t want to stop.”

Even though he continued to do cardio, Derek kept gaining weight in the off-season.

“After the Olympia, I kept training, eating clean, doing cardio, and feeling good, but I started to gain weight. I tried to keep my weight under 240 pounds, and if we could max out at 240, we’d be good,” said Lunsford.

Despite measures to keep his weight in check, Rambod said Lunsford’s body wanted to grow following his weight cut for 212 at Olympia in 2021. They used fat burners instead of cardio that way Derek wouldn’t keep getting hungry following a workout.

“After the Olympia, it seems like your mind and body were literally just hungry. We tried to keep his protein mild to medium, focus on cardio and avoid the double-edged sword of cardio triggering more hunger. We started running fat burners in the off season to help him stay in shape.

He’s doing his cardio four days a week and [we] were trying to keep his calories in check and make sure he doesn’t have any extra cheat meals. If he doesn’t stay lean and dry, he can blow up and become too bloated and heavy, which can be a detriment to his health,” Rambod explained.

Rambod and Lunsford spoke with Olympia brass after Flex Lewis announced his retirement. Lunsford revealed that when all is said and done, he wants to be included with names like Arnold Schwarzenegger and four-time Mr. Olympia Jay Cutler.

“After Pittsburgh Flex [Lewis] announced his retirement, a spot in the Open Class opened up, but it wasn’t automatic for us. So we had to try to make a decision. Many people were tagging me in posts that they were talking about Hany sucking Derek down [to make weight in 212].

Derek wanted to win the Sandow [in the Open] and be like Arnold Schwarzenegger, Lee Haney, Jay Cutler, Phil Heath — and all of them. It’s about what your end goal is and what your dream of winning is. You wouldn’t want to alter an athlete’s career for the sake of putting another notch under your belt,” says Rambod.

Like many others in the bodybuilding community, Lunsford realized he could stand against other top Men’s Open competitors in Pittsburgh.

“The Pittsburgh Pro guest posing gave me the idea to go in this direction for sure, and you [Rambod] still encouraged me to keep refining this physique over the next couple months. I wrote a letter to Jim Manion, Tyler Manion, Dan Solomon and Jake Wood and requested a special invitation to the show. They talked, got back to us, and now everyone knows it’s history,” said Lunsford

According to Rambod, Lunsford’s focus this season is on his back, chest, shoulders, and arms.

“There is no cap, so you have to balance out the conditioning that you’ve brought in the past, while also trying to create more graininess through the muscle bellies. For him, it’s going to be about his back, his chest, his shoulders, his arms, and continuing to grow his outer sweep. His legs are going to look stronger now.”

Lunsford added that this year’s Men’s Open landscape is full of threats.

In preparation for his first Men’s Open appearance at Olympia, Lunsford has trained alongside 2021 Arnold Classic winner Nick Walker. The two met up during the off-season and smashed a brutal leg day training session together. Walker agrees Lunsford will be a threat on the Olympia stage but shared that he will struggle with the size of last year’s top five.

With rising stars like Andrew Jacked making an impression in the Men’s Open division, this year’s lineup is expected to deliver one of the greatest shows in the sport’s history. With plans of adding size to his back, chest, shoulders and arms, Lunsford intends to make a statement at his first ever Men’s Open contest.