Brian Shaw Leg Presses a 2,000-lb Car In Preparation For The 2022 Shaw Classic 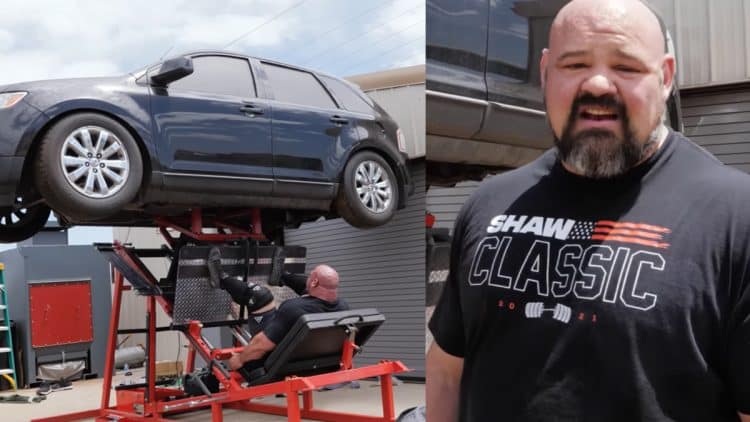 The third and greatest yet edition of the Shaw Classic is just a few weeks away, so the hype is reaching its all-time high. The 2022 Shaw Classic will take place on Aug. 13-14, 2022, at the Budweiser Event Center in Loveland, CO. It will be a two-day competition consisting of eight events, one of which is a brand new addition to the Strongman scene. That will be a Car Leg Press, which has been added because of Brian Shaw’s wishes.

Ever since 4x World’s Strongest Man champion Brian Shaw announced all the events for the 2022 Shaw Classic, people have been wondering what the Car Leg Press will look like. Brian brought us a glimpse of how it looks and shared the whole process on his YouTube channel.

Brian Shaw started the video by going to pick up the car, which he later loaded on the leg press machine. He also modified it for mainly safety reasons, but also in the hopes of making the event more interesting. Most notably, Brian angled the leg press to 35 degrees, so it would be more comfortable for the athletes.

“The car is heavy, very heavy, and I want this to be doable… We are going to modify the leg press to change the leg press a little bit. The weight is still going to be incredibly difficult, but it’s meant to be a challenge.”

The video jumps to the moment when Brian Shaw received the modified leg press. There has been an addition of a cable that can be used to pull the leg press in the event that some competitors get pinned down or are unable to move it. Brian also used the winch to see how much the car weighs and it apparently came out to 2,000 pounds (907.2 kilograms). As Brian tried the leg press, he was naturally intrigued. He completed a few reps across two sets, and it is safe to say that Brian was satisfied.

“Now that is a Strongman event. It is quite literally everything that I pictured this event being… There is no way you can look at that and say that it’s not awesome.”

Judging by the preview that Brian Shaw gave us, the Car Leg Press is looking really promising. He was able to do multiple repetitions with a 2,000-pound (907.2-kilogram) car but also had to struggle a bit. So, it has the potential to become a very competitive event, while also changing the outcome of the entire 2022 Shaw Classic leaderboard.