Larry Wheels shows off extreme strength despite hopping off steroids. 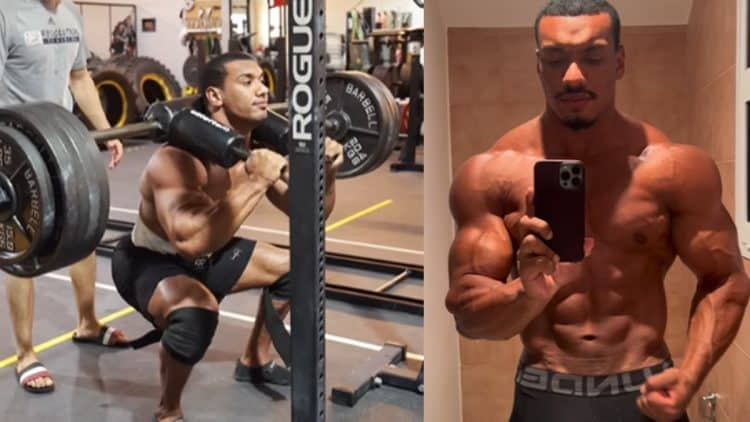 Larry Wheels is by all accounts one of, if not the biggest figure in the fitness industry, but over the course of his career most of his successes have been based upon the use of steroids. However, Larry recently made the decision to stop using them, and as a result he is experiencing some changes in his physique as well as the strength he has.

Larry Wheels has been putting up fitness content for years, but it got even more exciting recently, as he is now giving deep insight into how his training and lifestyle have changed. It seems that Larry now has some limits, but most people are still nowhere near his strength level.

During one of his most recent training sessions, he found out how much he could do on a squat AMRAP (As Many Reps As Possible) with 495 pounds (224.5 kilograms). Larry shared the video to Instagram on September 19th, which saw him squat the enormous weight for 15 repetitions.

Larry Wheels used knee wraps, lifting belt, and the safety squat bar to accomplish this lift. This seems to be the case because he wants to preserve his joints and muscles, which probably got weaker after he stopped using steroids and PEDs.

In his announcement that he would be stopping the use of steroids, Larry Wheels made it clear that he would also need TRT (Testosterone Replacement Therapy) to keep the muscles in good shape.

“Now, going completely off isn’t an option for me. I cannot produce testosterone naturally. So, I am going to be on testosterone replacement therapy (TRT). I tried pull cycle therapy several times when I began cycling and I was unable to recover.”

Larry Wheels then shared a physique update after a month on TRT and he looked absolutely amazing. He somehow seems to have gotten even more shredded, but the size difference is very evident as well.  The difference in bodyweight between before and after was not disclosed by him.

Regarding the strength difference, Larry Wheels recently tested his squat and bench press. He ended up squatting 269.9-kilogram (595.1-pound) and bench pressing 224.1-kilogram (494.1-pound) for five reps. For reference, during Larry’s incredibly successful powerlifting career where he claimed 11 victories in 16 competitions, Larry’s most fabulous squat and bench were 394.6 kilograms (870 pounds) and 292.5 kilograms (645 pounds) respectively.

Larry Wheels is now using 175 milligrams of TRT a week, but this is almost nothing compared to what he used to take. So, it is very impressive how he manages to maintain his strength and physique, as it requires a lot more determination now. However, Larry is doing exactly what he desired and that is finding out what can be accomplished without steroids.