A little more than a week after her dislocated elbow forced Brooke Wells out of the 2021 CrossFit Games, she gives an update and shares more details of the injury 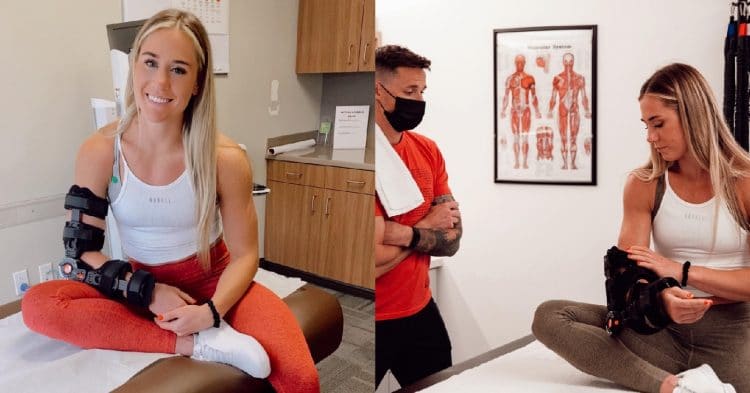 When Brooke Wells was forced out of the 2021 CrossFit Games, it was clear that she had hurt her arm. Now she has given an update on the situation, revealing things were far more serious than initially thought.

Wells was doing fairly well during the 2021 Games, before she was forced out of the contest during the snatch event on Day Three of individual competition. It was later revealed that she had suffered a dislocated elbow that was the cause of her withdrawal from the contest.

About a week and a half removed from this injury, Brooke shared an update with her fans on Instagram. Here she revealed that unfortunately the situation was worse than initially thought, and that she will need reconstructive surgery to repair the muscles and ligaments that were torn in her elbow from this incident.

It’s been a whirlwind since my elbow injury last week at the CrossFit Games. Thank you so much to everyone who continues to check on me, offer recommendations, or wish me good luck,” Wells wrote.

“Immediately after the Games, I received an MRI at the hospital in Madison. The images were passed on to experts who work with other professional athletes and understand the demand competitive CrossFit requires of my body.

Although the results were not what I hoped to hear, the consistency among their feedback gives me confidence.

There is a complete tear of the muscle and ligaments on the inner side of the elbow (UCL), which caused the dislocation. A high-grade tear of the lateral collateral, and the flexer tendon was pulled of the bone. There was no fracture, or no surface damage to the joint,” Wells continued.

“Through a thorough process, my team and I have identified the doctor that who will complete reconstructive surgery (Tommy-John) to stabilize my elbow, along with tendon flexor surgery. All the doctors who reviewed my injury expect a FULL RECOVERY.

This has been a lot to process, with plenty of emotions. But above all I’m anxious and excited to finally get my elbow FIXED, so I can get back to doing what I love. I’m staying positive and love your support so much!! I’ll continue to provide updates as available.”

It was extremely unfortunate to hear that Brooke Wells suffered this severe of an injury to her elbow, but the good news is that the doctors are predicting a full recovery. Hopefully this is the case and it does not keep her out of action for too long, as she is one of the most beloved figures in all of CrossFit.

She finished the 2021 CrossFit Games with 792 points, landing in 20th place overall, but was in the top ten at the time of her injury. There is no way of knowing how she would have done with the final events, but it is disappointing that we did not get to find out.