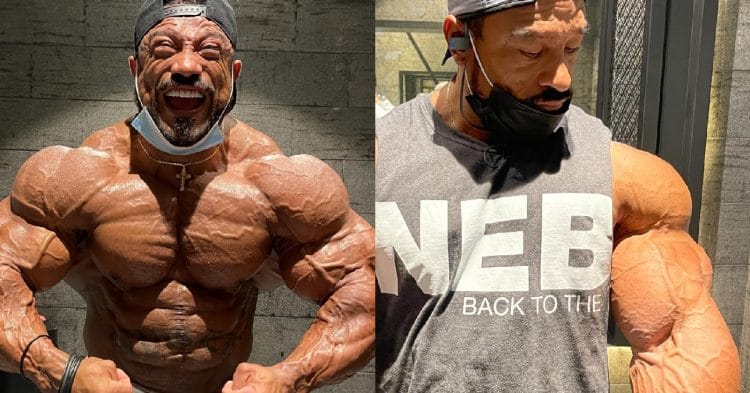 It is fair to say that Roelly Winklaar looked far from his best at the Chicago Pro, but he is hoping to right the ship at the upcoming 2021 IFBB Europa Pro. Days out from the contest, he has revealed his current physique, and it seems that he has a good shot at securing that Olympia invitation he is seeking.

When Winklaar competed at the Chicago Pro it was his first contest in nearly two years, so it was expected that he might be a bit rusty. After he came in fifth place at this show, it was believed that he might return at the Tampa Pro, but he shortly revealed that he was skipping that contest in order to be more prepared for the Europa Spain show.

Days out from this contest, Roelly decided to give fans a glimpse of his physique to see how much it has come along since Chicago. Posting to his Instagram, he shared a current update ahead of Spain, where he looks to have solid conditioning and promises that he is ready for round two.

While this is clearly a limited view from specific lighting and angles, it does appear that Roelly Winklaar has made some adjustments since we last saw him. Fans will have to wait and see if that makes a difference this weekend, but if he is as good as this update tends to suggest, he could definitely end up with an Olympia invite.

One of the reasons Roelly was likely more inclined to compete in Spain rather than Tampa, is because the Europa Pro will be giving 2021 Mr. Olympia invites to the top two Men’s Open competitors. This is a major benefit, compared to most other IFBB shows only awarding one invite.

Another point of interest for Winklaar could very well be the lineup at this contest, which is not as stacked as Tampa was. While there are undoubtedly some very talented athletes competing, the biggest name besides Roelly’s that is on the competitor list at the time of writing is a returning Nathan De Asha.

Time will tell if Roelly Winklaar is able to return to form at the 2021 IFBB Europa Pro, and score an invitation to this year’s Olympia. Judging by what we are seeing here though, he seems to have a solid chance of doing just that.