Brooke Wells and her sister Sydney indulged in a training session, and a workout challenge with Buttery Bros. 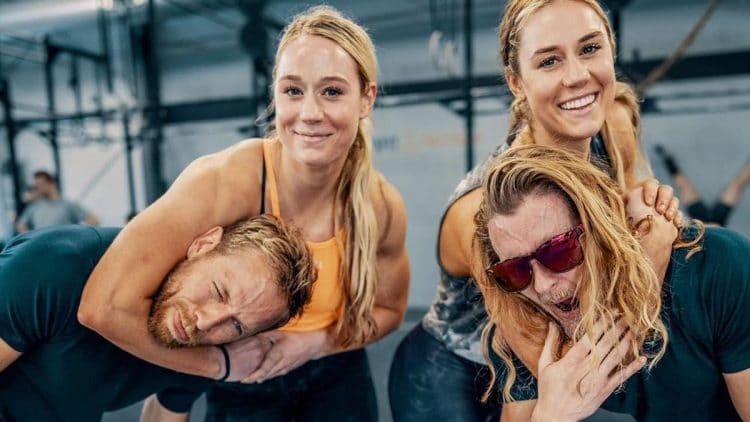 One of the greatest CrossFit athletes, Brooke Wells, has almost healed from her elbow injury. Brooke got injured in the Event 12 (One-rep-max snatch) at the 2021 CrossFit Games, and ended up needing reconstructive surgery. She attempted to snatch 190 lbs, but it didn’t go as planned, which resulted in her withdrawal from the competition. Brooke is now almost fully recovered, and is preparing for the 2022 CrossFit season.

Brooke’s first competition will be the 2022 CrossFit Open, scheduled to start on February 24th. In the preparation for the competition, Brooke and her sister Sydney joined the Buttery Bros for a training session. The video was published on Buttery Bros YouTube channel, and apart from the workout, Brooke answered some questions.

Brooke’s injury was very serious, as she had her full Flexor tendon pulled off the bone. In addition, she completely tore her UCL (ulnar collateral ligament), and had a serious lateral collateral tear.

While warming up, Brooke showed the injury mark on her elbow, which shows how severe it was. She also stated that there were no artificial parts incorporated into her elbow.

Her warm-up consisted of stretching, “waiter’s carries,” explosive jumps and some shoulder work. Brooke’s recovery is going very well, as she can do a handstand walk, while doing shoulder taps.

They moved on to a standing shoulder press, which can really take a toll on the elbows. However, Brooke was handling it extremely well, and hit a post-surgery PR. She also stated that the movements which require elbow mobility do not feel fully comfortable yet.

The next exercise was the hang cleans into front squats. In the video, we can see the exercise montage, while Brooke explains her recovery.

” (Following the surgery) I went to physical therapy every single day, 3 hours for 5 weeks… I didn’t work out for a full month and took the time to let my elbow heal.”

Brooke started easy with the training, involving a lot of biking, one arm dumbbell movements, and gradually made the workouts heavier. Following that, we can see her doing some handstand push-ups.

After finishing a quick game of “Who’s more likely?” The Buttery Bros prepared a challenge.

To win the challenge, the team had to gather more calories on the echo bike than their opponent.

Buttery Bros had a lead until round three, but then the sisters started catching up. It turned into a great battle, but the Buttery Bros kept the lead and won, with a difference of 4 calories. They ended up doing some pull-ups to finish the workout off.

Open workouts will begin on February 24, while the semifinals will take place from May 20th – June 12th, 2022, with ten live, in-person competitions taking place across six continents. The semifinals are the final stage of qualifying for the most prestigious competition that is 2022 NOBULL CrossFit Games.

Courtesy of Buttery Bros YouTube channel, you can watch the video here:

How Long Does It Take to Get Shredded?